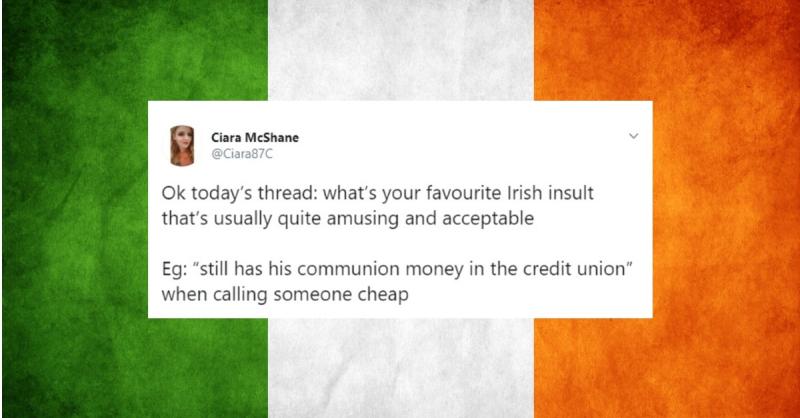 Sometimes you just have to sit back and bask in the ingenuity of the Irish public, and this Twitter thread is a prime example of that.

Twitter user Ciara McShane's thought-provoking tweet went viral back in 2018 with over 1,000 replies and retweets - and it has surfaced once more.

Eg: “still has his communion money in the credit union” when calling someone cheap

Twitter can be a mixed bag at times. Occasionally, however, it does throw up a few gems and it's hard to top some distinctively Irish humour.

We're all familiar with the usual "communion money" quips, but courtesy of the above thread we've discovered some new additions that may become part of our every day (when we return to socialising, that is).

Here's a selection of our favourites:

So simple, yet so sinister. Almost mythic

She's like the heel of the bread: everyone touches her but nobody wants her. Harsh but gold!

"She'd catch the bouquet at a funeral"

Of someone who always has to one-up your story:
“If you told him you were away to Tenerife, he’d say he was going to Elevenerife”

“She’d be in the crib but the Virgin Mary got there first” — about a performatively pious woman at the centre of all parish activity.

About a fella so boring that you'd do anything to avoid him: 'That fella? Sure, he'd drive a funeral up a by-road.'

"He should buy an arse to put in those trousers"

When someone has gotten a bit above themselves my Gran would say they had "the print of the shit bucket still on their arse".

"If he was made of chocolate, he'd eat himself" - My mam on Bono.

' you make a good door but a bad window' to someone standing in front of the TV.

I heard a good one about bad luck- I have that much bad luck that if I stuck my head in a barrel of nipples I would come up sucking my thumb...

When a boring story comes to a conclusion, "quick, close the door before the craic gets out"

"He has enough cheek for a spare arse". https://t.co/xhwGRXBTMK

He is that mean he would eat the sandwiches at his own wake.

“There’s ignorance in that fella that’ll never be used!”