Waterford man (86) defies the odds and recovers from Covid-19 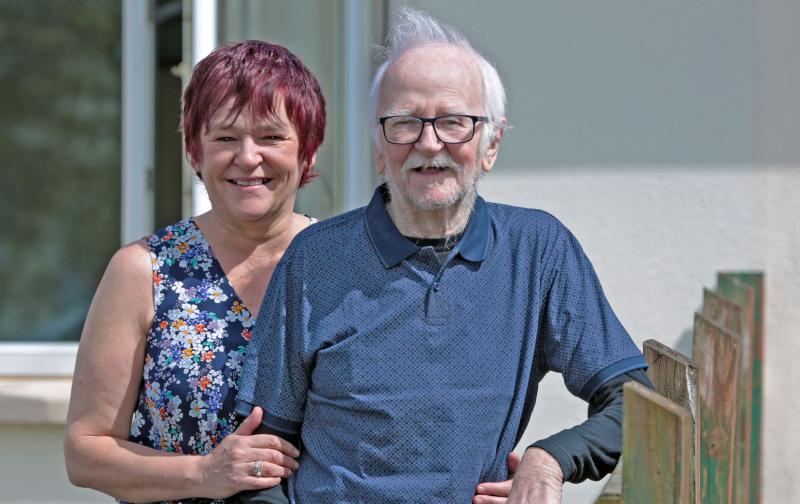 Waterford man (86) defies the odds and recovers from Covid-19

As the number of confirmed cases of Covid-19 is falling, and the country looks towards an easing of lockdown restrictions, the focus is now on the recoveries from the virus and the good news stories.

One of those recoveries is Waterford native and Longford resident, Nicholas Coughlan, who will be turning 87 in a few weeks.

Nicholas contracted the virus when he went to Tralee for a hospital appointment in March and developed a mild cough.

“The first day I went into hospital was March 20 and I had the hip operation,” Nicholas said last week.

“It was a Friday and I went down to the Bons Secours Hospital in Tralee. When I got out of there, I was transferred to the Abbot Close Nursing Home in Askeaton, Limerick. I was there for four weeks and then I came home to Legan [Longford].”

While he was in the nursing home, staff noticed he had developed a mild cough and decided it would be best to get him tested for Covid-19. The results came back positive.

“There was nothing wrong with me as far as I could see,” said Nicholas.

“I knew nothing about it until they told me I had it. They tested me because I had a mild cough, but I always have a mild cough so as far as I was concerned, there was nothing at all to indicate I had it. Even they were surprised.

“I was tested in the back of a van in the nursing home. It only took a couple of minutes and then they were gone. I came back positive and I had to go into isolation then.”

Nicholas was in isolation for 19 days, seeing nobody except for the nurses who came in with their protective gear.

“I was the only one in the nursing home who had it. I was in there on my own. It was boring,” said Nicholas.

“I did nothing,” he added, when asked how he passed the time.

“What could I do? I read a book, but I couldn’t concentrate. I was too busy worrying about it.

“And I did worry about it. I thought ‘oh my god, what do I do now?’ I couldn’t come out of the home until I was clear.”

The news that the virus is most dangerous to the elderly was certainly a cause for concern for Nicholas and his family and his daughter, Michaela Williams, said it was a terrible experience for everyone.

“It was horrible leaving him there. They said we could skype him when he was in the home but we could only talk to him over the phone. We thought ‘oh god, is he going to die; is that the last time we’ll see him?’” she commented.

But Nicholas beat all the odds and walked out of that nursing home as soon as he was well enough.

“It was a relief to come out of the home and to see family again,” he said.

“I don’t think people realise it’s so horrible to be in there alone. You see people going past and you can’t even talk to them. It was terribly lonely just waiting there.

“There was a male nurse that would come in around 9 o’clock with tablets and a meal and he’d chat to me for a while. Every night he’d come along and give me an injection and I’d say ‘oh, here he comes with the big needle in his hand’.”

To survive such a deadly virus is no mean feat for a man of Nicholas’ age and when it was put to him that he must be as “strong as an ox” to recover so well, he laughed and put it down to his lifestyle.

“I used to walk up to six miles a day sometimes. At the moment I have a short walk from here up to the shops. I got home and I’m in great form now,” he said.

Nicholas used to work in England, driving busses before returning home to Ireland where he worked with the circus for years doing publicity. He then took up a job with the funfair and kept working until he was 80 years old and his hip started to give him trouble.

He was eager to express his gratitude to all of the healthcare staff who looked after him, both in the hospital while he was getting his hip operation, and at the nursing home when he was in isolation.

And, while he admits he was extremely lonely during his isolation period, he believes the government restrictions were the right way to address the Covid-19 pandemic in Ireland.

“I didn’t spread it and I think that was the answer to it. The government lockdown is a good thing as far as I can see,” he said.

“I was in there and I never shook hands with anyone. I always washed my hands and I think that’s what will beat this thing in the end.”