WATCH: Taoiseach's National Address - Calm before the Storm; coronavirus crisis 'could go on into summer'

Historic address to the Irish nation by An Taoiseach, Leo Varadkar 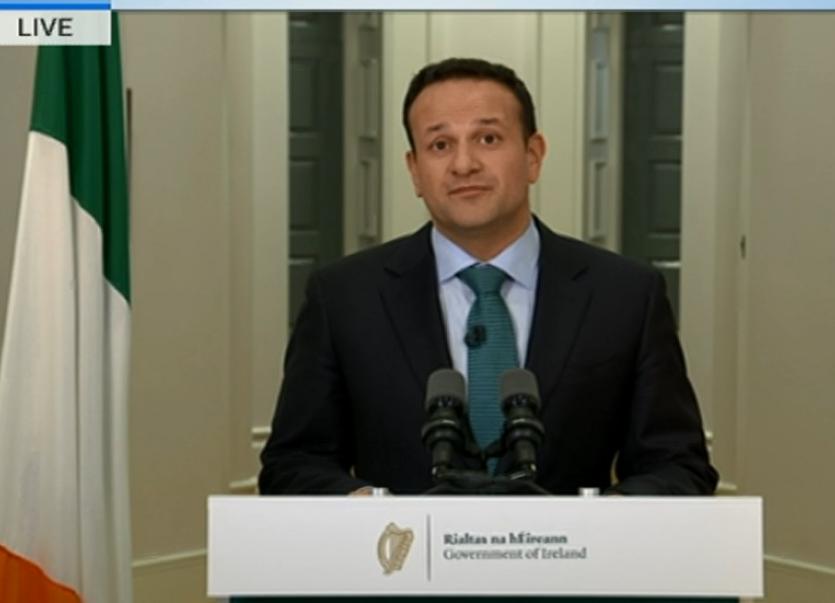 AN Taoiseach Leo Varadkar has warned the effects of coronavirus will be felt in Ireland well into the summer.

In an unprecedented televised St Patrick's Day night address, he also warned that at present we are only experiencing "the calm before the storm", with thousands out of work, and the country's population in self-isolation.

He said while the country will emerge from this pandemic, the damage to Ireland's economy will be "significant and lasting".

The St Patrick's Festival is one of many events which has been cancelled or postponed in the wake of the global outbreak.

Further to this, the Taoiseach urged people to cancel or curtail social gatherings like parties, weddings and other celebrations.

"I know these choices won't be easy, but they are necessary. More will be required in the coming weeks to reduce the spread of the virus," he said, "At all times we will be guided by our public health emergency teams led by the chief medical officer. We will always put your life and your health ahead of any other concern."

Schools and pubs are closed until March 29 at least.

Mr Varadkar said: "Many of you will want to know when this is over. The truth is, we just don't know yet. This emergency is likely to go on well beyond March 29. It could go on for months into the summer. So we need to be sensible in the approaches we take. We will deploy our full resources to ensure that essential shops, workplaces and transport can continue to operate. People still need to buy goods and avail of personal services in the weeks and months ahead."

However, he called on businesses and the general public to afford their co-operation, including staggered opening hours, breaks, video-conferencing rather than face-to-face briefings, and ultimately working from home.

He also said people should shop online at local businesses, rather than going into shops.

"In short, we are asking people to come together as a nation by staying apart from each other," he said.

"I know it's going to be very difficult to stay apart from our loved ones. Most of our parents just want to give their grandkids a hug around about now," An Taoiseach said, "But as hard as it is, we need to keep our physical distance to stop the virus."

He called on people apart from loved ones to use Skype, and other social media tools to check in with loved ones "and promise to see them soon".

Mr Varadkar also appealed to the youngsters watching, to remember that this time is tough on their parents.

"I am asking you to ask your parents at least once a day what you can do to help them," he said, "Keep up your schoolwork, and call your grandparents".

He also extended huge praise to Ireland's army of healthcare workers, stating: "I am so proud of them all. Not all superheroes wear capes. Some wear scrubs and gowns."

"This is the calm before the storm, before the surge. And when it comes - and it will come - never will so many ask so much of so few," the country's leader said in an 11-minute address to the nation.

Tens of thousands of people in the hospitality sector have been laid off virtually overnight as pubs, clubs and restaurants close down on public safety grounds.

Mr Varadkar warned this will continue.

"More will be worried it might happen to them, especially as we do not know when the emergency will end. I know this is causing  huge stress and anxiety to you and your families on top of the fear of the virus. While we don't have all the answers now, we are doing, and will do all we can to help you through the time ahead."

"When we're through the worst, we will get businesses open again and people back to work," he pledged.

He said while Ireland will bounce back, the damage will be "significant and lasting".

"The bill will be enormous and it may take years to pay it. Government has already signed off on a €3bn package for health, social welfare and business, and will take further action as needed."

"So much harm has already been caused by these messages and we must insulate our communities and the most vulnerable from the contagion of fear. Fear is a virus in itself," he said, asking people to take breaks from the news, the media, and social media.

"Look after your mental health and well being as well as your physical health," he added.