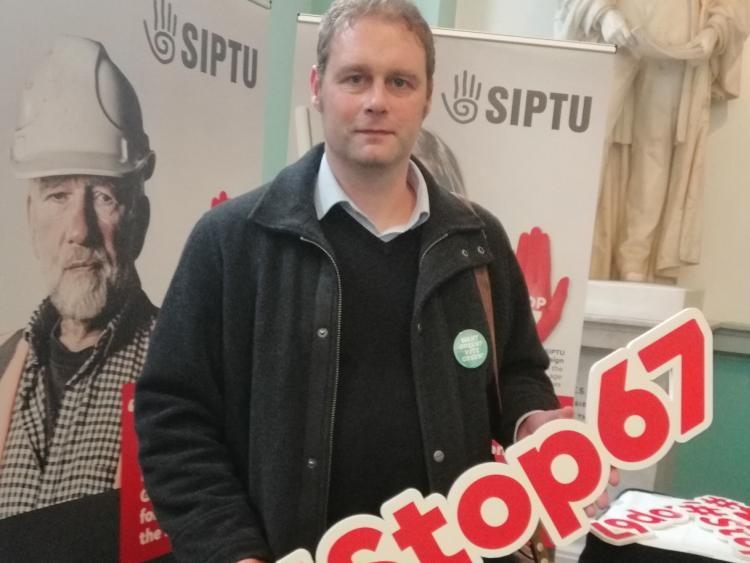 SIPTU has launched its #STOP67 campaign which looks to address the pensions gap created by government plans to raise the age of the state pension to 67 in January 2021.

Waterford councillor Marc Ó Cathasaigh, who attended in his capacity as Green Party spokesperson on Social Protection, spoke at the meeting to support the SIPTU campaign and to demand action and clarity on the issue from Fianna Fáil and Fine Gael.

"The Green Party wholly endorse SIPTU’s calls to press the pause button on any increase to the state pension age and to convene a Stakeholders Forum on the issue.  At the moment, the research on the cost of ageing is insufficient and inadequate.

"We need to move to evidence-based policymaking rather than guesswork and conjecture. Gathering all relevant stakeholders around the table will allow us to do that.

"Our views on retirement have to evolve and move away from discriminatory mandatory retirement ages to a view where retirement is voluntary, flexible and appropriate.

"We know that changes made to the state pensions are most keenly felt by the most vulnerable in our society. Those reliant solely on the state pension in retirement are likely to spend their estimated 20 years of retirement close to the poverty line.

"In fact, alterations to state pension age are likely to be a false economy. Those forced to retire at 65 will face a pensions gap that they’ll have to fill with any small savings they may have accrued over their working lives which they may have wanted to keep as provision against health costs in later old age.

"With that cushion exhausted, older people may make decisions around feeding themselves or heating their home which could adversely affect their health. In this scenario, older people may end up relying on health services sooner and more often, with significant cost to the state.

"We are happy to support SIPTU’s campaign, and echo General Secretary Joe Cunningham’s calls for Fianna Fáil and Fine Gael to nail their colours to the mast on this issue and bring an end to the uncertainty for older people in this situation," Marc concluded.