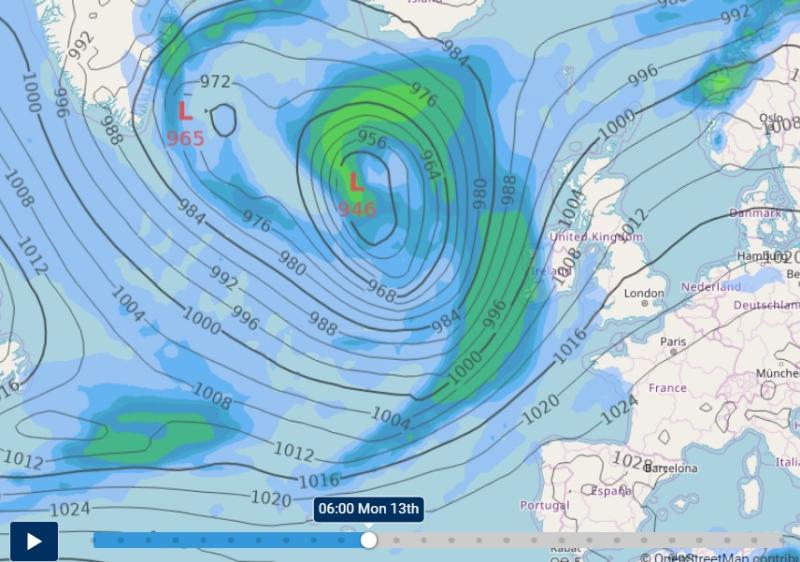 Met Éireann has put Ireland on alert for weather warnings four days of 'very unsettled' stormy weather bringing 'severe' wind and heavy rain is set to sweep across from next Monday.

Notice of bad weather on the way, came at 2pm on Friday, January 10 when the forecaster issued a weather advisory for all of Ireland.

"We are entering a period of very unsettled weather. Further warnings for strong winds and rainfall are likely to be issued in the coming days. A combination of spring tides and gales may lead to coastal flooding at times," said the advisory.

The notice is valid from just after midnight on Monday, January 13 to almost midnight on Thursday 16/01/2020

The advisory was issued at 2pm on January 10.

In its forecast, Met Éireann says Monday will be a very windy day with strong to gale force southerly winds bringing in heavy rain from the Atlantic. It says there's the risk of severe winds clipping the Connacht coast.

Met Éireann expects showers will follow from the west through the afternoon and evening and the winds will turn southwest moderating a little. Temperatures of 7 to 9 degrees. MORE BELOW TWEET.

Weather advisories are issued up to about a week ahead to provide early information on potential hazardous weather.

In the meantime, Met Éireann has issued Status Yellow wind and rain warnings for counties in the west of Ireland for the weekend. More below tweets.

The forecaster says Saturday will start wet with spells of heavy rain, but it will turn more showery from the northwest during the afternoon and evening. Strong to gale force and blustery southwest winds, with a risk of coastal flooding, will veer westerly and moderate during the day. Afternoon highs of 10 to 12 degrees in the east and south, 7 to 9 degrees further north and west after a mild morning.

It says Saturday night will bring a mix of clear spells and Atlantic showers. Later in the night, showery rain will affect Southern parts. Lows of 2 to 5 degrees with some frost patches and light to moderate southwest winds.

Sunday will see good spells of sunshine after early rain clears the Southeast. There will be some scattered showers through the day with a few wintry, especially on Northern hills. It will be a cold day with afternoon highs of just 5 to 7 degrees in moderate westerly breezes.

Sunday night will be dry for most of the country although patchy outbreaks of rain will push into Atlantic fringes overnight. Cloud will keep temperatures up at 4 or 5 degrees in the west but cooler in the east with lows of 1 to 3 degrees, with patchy frost likely. Southerly winds will be mostly moderate, but fresher along Atlantic coasts and increasing strong there by morning.