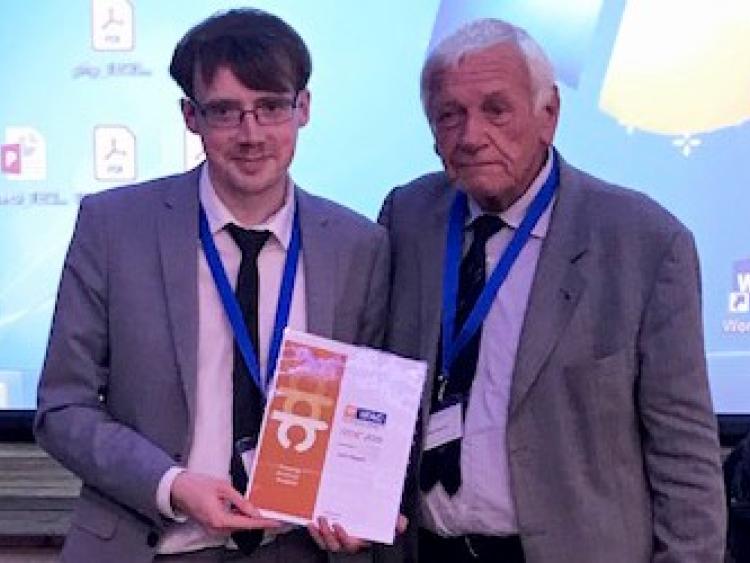 John Organ, PhD graduate at INSYTE in the Waterford Institute of Technology (WIT) School of Science and Computing, won the Best Young Author Award at the 19th International Federation of Automation and Control TECIS Conference in Bulgaria for his paper on the Irish banking crisis.

WIT has a long tradition of human-centered systems education and research and the Centre for INformation SYstems and TEchno-culture (INSYTE) is an interdisciplinary, cross-school research centre in the field of information systems and organizations.

This is a very prestigious achievement for INSYTE and WIT. Five other papers from Russia, Greece and Bulgaria were amongst the six shortlisted for an award by the selection committee. The award was presented by Professor Emeritus Peter Kopacek, Vienna who was the International Conference Chairperson.

John was shortlisted by the selection committee for an award in 2018, nominated as one of the six best papers at the TECIS 2018 conference in Baku, Azerbaijan.

The Young Author Award is given for the most outstanding paper by a young author as selected by senior members of the International Programme Committee of the Conference. In Sozopol, this committee included leading academics from the Technical University of Vienna, Moscow Academy of Sciences and an editor of a prestigious journal from Cambridge.

At the awards ceremony, John Organ MSc of INSYTE said this award was a highlight of his life, especially given the very high quality of the shortlisted papers and the international stature of the members of the section committee. “This felt even better than successfully finishing my PhD viva voce in the summer,” he said.

John recently completed his PhD which explored the systemic factors which led to the Irish banking collapse and he was officially conferred with this award in October 2019.

Dr Larry Stapleton, Director of INSYTE, who supervised John’s PhD, highlighted the significance of the award for WIT and for Ireland: “To place this in context: 120 papers from 24 countries were accepted by the conference organising committee. INSYTE were representing Ireland at TECIS and John won, beating off very stiff competition from some of the most prestigious institutes in the world. This is a great day for Irish research. We are so proud.”

John began higher education in 2005 at Waterford College of Further Education where he studied for a post-leaving cert certificate (FETAC Level 5) in Information Technology. He found he liked IT and came into WIT on a short certificate programme in commercial computing around 10 years ago. He went onto the ordinary level degree, gaining first-class honours and eventually completed his honours degree in Software Systems Development, then called Commercial Software Development.

He again excelled and was accepted onto the Masters in Information Systems Processes, again achieving some of the highest grades in his year. He then began his PhD studies with INSYTE in the Department of Computing and Mathematics, which he recently successfully completed under Dr Larry Stapleton’s supervision.

Since he began his PhD study, John has published six peer-reviewed academic publications and was appointed an examiner for and has lectured at the College of Professional Financial Services, UCD. He has also provided tutoring and other services at WIT.