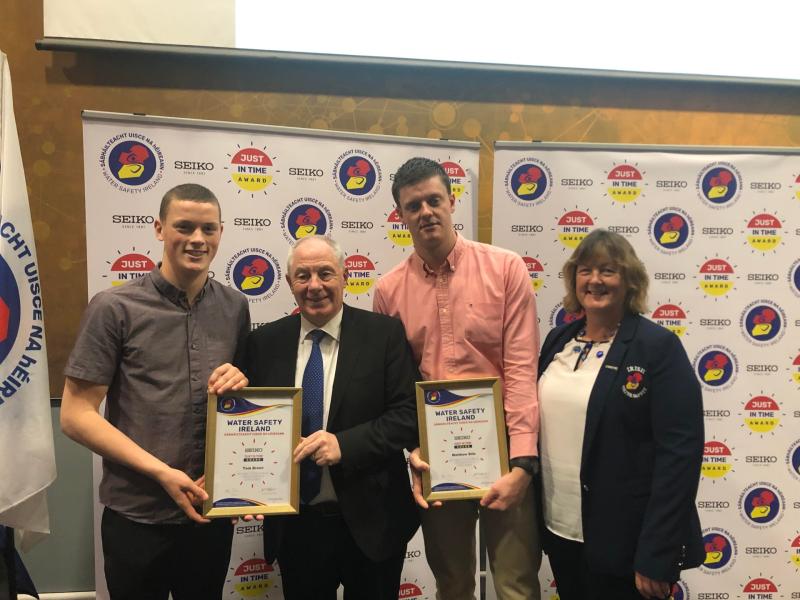 Matthew, a lifesaver, former lifeguard and currently an emergency medicine doctor in Crumlin Hospital in Dublin, was home in his native Tramore for a weekend in August. Whilst driving along the prom early one morning, he noticed a group of panicked bystanders gathering and attempting to throw a lifebuoy into the sea. Upon exiting his car Matthew noticed two people, a man and woman, in the water being pushed against the prom wall by the high tide and large swell. One of the two people was attempting to help the other, who appeared to be in significant difficulty.

Matthew grabbed a rescue tube from his car and ran to the slip, diving into the water fully clothed before swimming out to the incident.

Matthew strapped the rescue tube securely around the woman, ensuring that she could have some degree of safety, thus allowing the male to begin swimming back to the dry land with support. Matthew then assisted the woman to safety and out of the cold water. If it wasn’t for the brave and decisive thinking of Matthew, the incident could have had a tragic outcome.

Tom Breen, a 16-year-old lifesaver, surfer and school boy from Ardscoil Na Mara in Tramore, was away in Lahinch, Co. Clare, at a surfing competition in September. Tom had finished his early morning surfing event when he heard shouting coming from the sea. Tom could see two men in the distance, who were obviously struggling. Tom knew something was wrong. Without hesitation, he grabbed his surfboard, sprinted to the water’s edge and paddled directly out to the two men, using a rip current to his assistance so he could arrive as fast as possible. Upon reaching the two men, Tom noticed that one of them was in extreme distress and reaching the point of exhaustion. Tom pulled this man up on to his surfboard and carefully paddled him to safety. The second man swam alongside Tom, who continued to guide him back to shore.

On returning to shore the exhausted man began moving but was hypothermic and in shock. Tom’s swift, decisive action resulted in this man’s survival.

Tom has subsequently proven his athletic prowess, going on to represent Ireland at the European Surf Lifesaving Championship in October, where he won a European silver medal in the board rescue event.