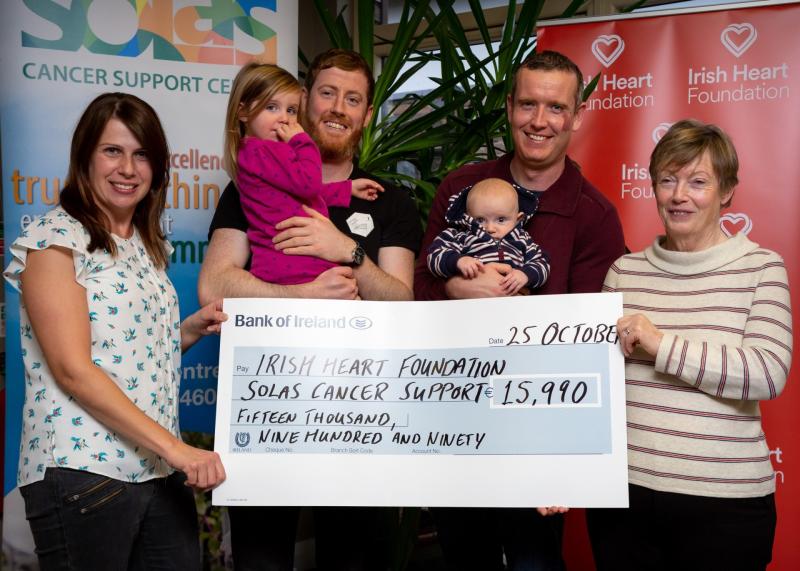 Waterford’s ‘Marathon Man’ Alan Corcoran has raised almost €16,000 to support the work of two charities by swimming the length of Ireland.

Starting on June 1 this summer, Alan swam from the Giant’s Causeway to Tramore, Co. Waterford. Swimming up to six hours a day and even covering over 30km in one swim, he completed the 500km in just under two months.

Now back on dry land, Alan today presented a cheque for €15,990.14 to the Irish Heart Foundation and Solas Cancer Support Centre, which is a very fitting start to World Swim Day, Saturday, October 26.

Alan took on this challenge in memory of his late father, former FAI President Milo Corcoran. Milo suffered a stroke in 2011 and subsequently died of cancer in 2016, and since then Alan has taken on several physically demanding challenges in support of the Irish Heart Foundation and Solas Cancer Support Centre.

In 2012, Alan became the first person to run a lap of the island of Ireland – completing 35 marathons in 35 consecutive days – and in 2017 he attempted to swim the length of Ireland, however, after swimming 200km, his efforts were scuppered on that occasion by the sinking of his support boat.

Speaking today, Alan said: “Losing my dad has been the toughest experience of my life. I was determined to try create some positives from that point of despair. I’m delighted today to be presenting almost €16,000 to the Irish Heart Foundation and Solas Cancer Support Centre on behalf of my dad, family and support team.

"My family and I know first-hand how important it is to support and care for people diagnosed with cancer and living with stroke, as well as their families and carers. I’d like to thank everyone who supported me through the challenge and donated to the two fantastic causes.”

Speaking on behalf of the Solas Cancer Support Centre, Chair Dee Jacques said: “This is not the first challenge Alan has undertaken to fundraise for our charity and we really appreciate his huge efforts. Seeing him in Tramore in July at the end of his challenge was both emotional and inspiring.”

Ruth Guy, Commercial Director of the Irish Heart Foundation, said: “We are incredibly grateful to Alan for his support and generosity since 2012. His strength and commitment to making a positive difference in the name of his father are a huge inspiration to all of us in the Irish Heart Foundation. This generous donation will make a real difference to people we support around the country who live with the effects of heart disease and stroke.”

Anyone who would like to support Alan’s challenge can still make a donation on his website, www.marathonman.co/donate/.