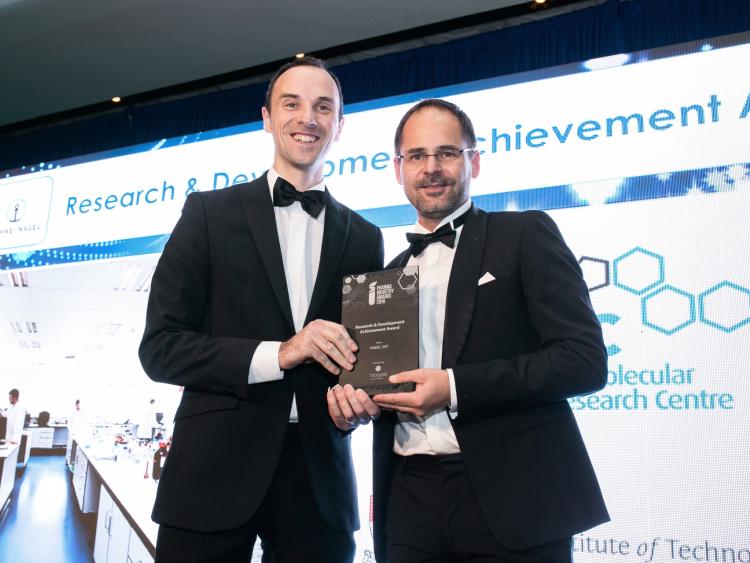 The Pharmaceutical and Molecular Biotechnology Research Centre (PMBRC) won the Research and Development Achievement award at the 2019 Pharma Industry Awards, held in Dublin on October 24.

This is the second time the PMBRC has won the R&D prize having previously won in 2017.

Celebrating 10 years of operations in 2019, the PMBRC research centre at Waterford Institute of Technology (WIT) has established itself as a leading research centre in the pharmaceutical, chemical and biologicals sciences in Ireland.

The centre, one of 15 Enterprise Ireland Technology Gateways, consists of an 800m2 state-of-the-art research facility. Situated on the main WIT campus, the centre supports R&D activities within the pharmaceutical and healthcare industries, while simultaneously cultivating an innovative research programme at WIT.

“We are delighted to win the Research and Development prize at the Pharma Awards” said Niall O’Reilly, PMBRC Manager, speaking after the awards ceremony on Thursday night.

“It’s been a busy year for us with the major funding awards, patents, industry licenses and significant growth in researcher numbers. We are celebrating 10 years of operations this year and it’s great to be recognised for our research capability in the pharmaceutical sciences that we have built up over the past decade."

Since launching in 2014, the Pharma Industry Awards has established itself as the benchmark for excellence for those operating in Ireland's pharma industry. The Research and Development Achievement award recognises an individual or teams working in the pharmaceutical sector on the research and commercial development of new products or new processes.