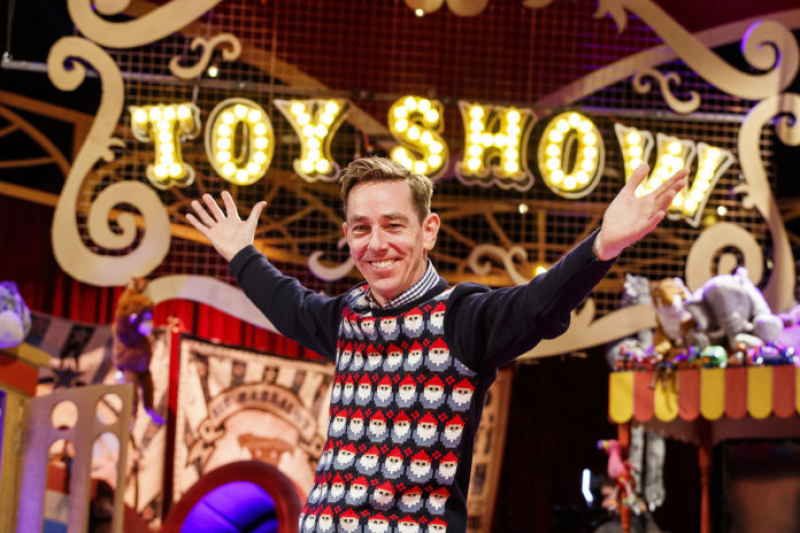 They are the hottest tickets since Willy Wonka had a brainwave about hiding golden wrappers in chocolate bars, and demand for audience seats for The Late Late Toy Show 2019 are set to surpass previous years, already hitting over 90,000 applications already.

The application process opened last Friday ahead of the biggest television show of the year, which will air on RTÉ One on Friday November 29.

Of the phenomenal demand for audience tickets this year, host Ryan Tubridy said: "We are gobsmacked by the response this year, it just gets bigger and bigger, everyone seems to want to be there. I think it's also in response to how warm and kind and inclusive the show is...people want a piece of that pie and I don't blame them, it's the most wonderful cauldron to be in and the most wonderful time of the year.

"If I wasn't doing what I do, I would also be among the 100,000 applicants for tickets because it's the best show in town."

The Late Late Show has been enjoying a clear run of ratings successes since it returned for a new season in September. Last Friday's episode of the show, which saw Ryan interview guests including the cast of Mrs Brown's Boys, Jamie Heaslip and John Bercow, had a reach of 996,000 viewers, with an average share of 47% of TV viewers tuning in.

The theme of The Late Late Toy Show this year is under lock and key in RTÉ, and will be revealed by Ryan in the days leading up to broadcast. Over 5,000 acts from all across Ireland have applied for the chance to appear on the show. On Monday next, October 21, a selection of those acts, whittled down by the Toy Show team, will travel to Cork to audition. Further auditions for selected hopefuls will be also held in Dublin next week.

The Ryan Tubridy Show on RTÉ Radio 1 will be broadcast live from Cork city next Monday morning.

"We have auditions in Cork next Monday, which we are extremely excited about because that allows us to meet the children who are hungry to be part of the show. Some will come and make it, and some won't...but it's all just fun. The train leaves the station essentially this week, with all the audience applicants and all the auditions. There's a fierce bang of tinsel in the air and we are getting ready to do this!"

Over the four weeks since Ryan's first callout on September 6th, The Late Late Toy Show team have made their way through thousands of applications. During the upcoming auditions in Cork and Dublin, the team will see over 100 acts, who have been whittled down from this year's exceptionally high standard.

Keep your eye on RTÉ's social media channels, where opportunities to win tickets for The Late Late Toy Show will present themselves in the coming weeks.