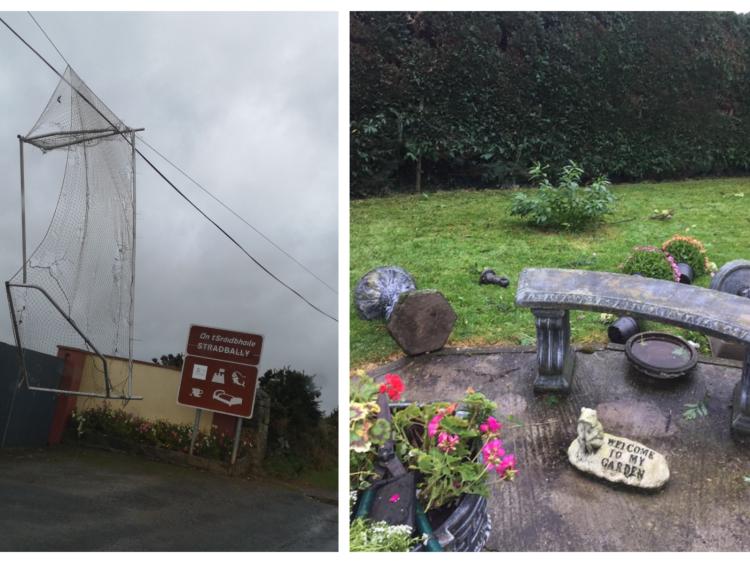 A freak mini tornado caused damage to homes and threw a set og goalposts out of Stradbally GAA grounds in Waterford on Monday morning.

Meteorologist Cathal Nolan revealed the unusual weather event on Monday, saying that "radar and satellite data indicate a tornado briefly touched down in the village of Stradbally at 5.30am on Monday morning.

"Such events are comparatively rare in Ireland though they do occur occasionally, especially in parts of the Midlands, known as Ireland’s tornado alley," he explained.

It now appears some damage was caused by the weather event with one woman posting photographs of her garden where ornaments and a concrete fence was damaged.

She said: "Roofers have just left. Over 50 tiles lifted off the roof of my neighbour's house." The falling tiles caused large divots on neighbouring lawns.

A small set of goalposts also appear to have been blown over the boundary wall and onto overhead cables at Stradbally GAA.

Another resident told us: "A roof slate shattered a large windowpane in my sliding doors and another slate shattered my windscreen and a few other bits of damage were caused. I could not believe the noise, it woke us all."

Another local described hearing the wind and thunder. "It was quite bad alright. It woke my daughter and a train going through the house wouldn't wake her up normally. I didn't notice any damage this morning but I left for work early also and it was still dark."

"I have never woken for a thunderstorm in my life and this morning [Monday] I was woken by roaring thunder at 5.40am and torrential rain. We are living approx 5 kilometres from Stradbally in Co Waterford," another recounted.

Another said: At approx 5.20am, the rain was otherworldly heavy followed by lightning. After brief calmer rain, the wind started to pick up so much it woke all the children in our house.

"It sounded like a helicopter or a jet engine over the house. Looking out the window we could see the pressure put on the trees from the wind," they added.

Another resident who lives above the village told us: "The noise of it was so strong it woke me and I saw the flash of lightning and then more torrential rain."

Met Éireann has been contacted for comment on this story.