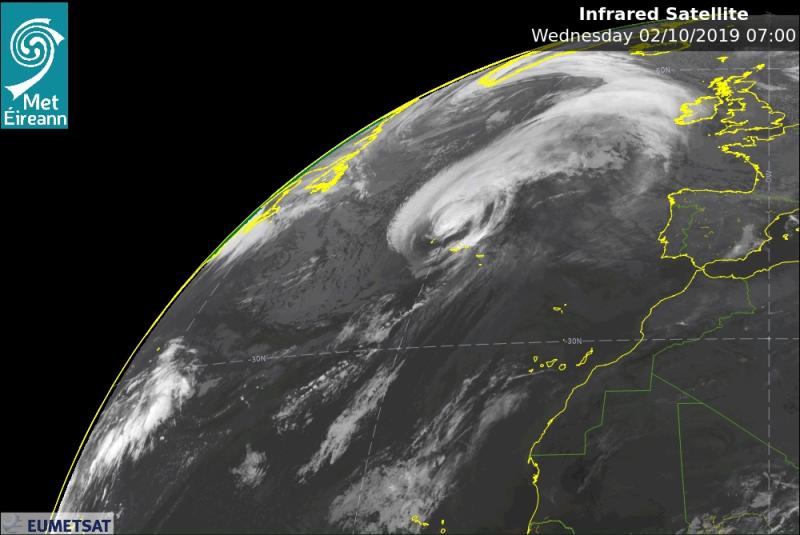 In its latest update, Met Eireann says that Hurricane Lorenzo is currently bringing hurricane force winds to the Azores, with gusts to 140 km/h recorded. The picture above shows the hurricane this morning.

It says the effects of Storm Lorenzo will begin to be felt across Ireland from midday Thursday, peaking late Thursday evening and Thursday night, easing Friday morning.

Met Éireann will issue national weather warnings at 10am this morning and the National Emergency Coordination Group are meeting at 10:30am.

At present Lorenzo maintains hurricane status in the Western Azores with maximum sustained winds of 155 km/h. Lorenzo will undergo extra-tropical transition within the next 24 hours as it engages with the polar jet-stream.

Lorenzo will accelerate north-eastwards across the mid-Atlantic during Wednesday, engaging with the polar jet-stream on Wednesday night approximately 1000 kilometres southwest of Ireland.

As Lorenzo passes over colder waters and engages with the polar Jetstream it will lose its tropical characteristics and no longer be a hurricane, but it will be a dangerous Atlantic Storm.

Storm Lorenzo will continue to accelerate north-eastwards, with its centre approaching the west of Ireland during Thursday. Lorenzo will then likely make a right turn, tracking across Ireland on Thursday night whilst it begins to gradually weaken.

The exact track Lorenzo will take over Ireland is still subject to change. The most severe winds associated with Lorenzo are likely in Atlantic coastal parts on the southern flank of the storm, however strong winds are possible in all areas.

Met Eireann says that there are many possible impacts from the approaching storm. In early October, trees are mostly in full leaf with a large surface area, so even moderate strength winds can bring down weakened trees and/or tree limbs. In addition, some trees may be compromised due to saturated soils at the moment, and with more rain forecast with Storm Lorenzo some disruption due to falling trees/branches is likely.

Storm Lorenzo will also bring heavy rain, and with falling leaves blocking drains and gullies, some surface flooding is possible.

The National Forecast for Thursday and Friday from Met Eireann is as follows.

Turning wet and windy on Thursday as the outer rain-bands associated with Storm Lorenzo track across Ireland. There will be strong and gusty southeast winds with gales at the coast and very high seas along the Atlantic seaboard. Top temperatures of 13 to 17 degrees. During Thursday evening, the centre of Storm Lorenzo will move closer to the northwest coast with strong southwest gales developing on Atlantic coasts and with strong and gusty winds beginning to extend further inland across Connacht and Munster. There will also be squally showers and a risk of isolated thunderstorms leading to some spot flooding.

The centre of Storm Lorenzo will move east to south-eastwards over Ireland on Thursday night with the strongest winds situated to the south of the storm centre. It will become very windy or stormy in Atlantic coastal counties overnight as winds veer westerly in direction. The swathe of strong winds will then transfer eastwards across the country during the night with the risk of inland gales across parts of Connacht and Munster. Squally bands of rain will accompany the strong winds with isolated thunderstorms possible, bringing a risk of spot flooding. Minimum temperatures of 10 to 14 degrees.

Friday: Strong winds and squally rain associated with Storm Lorenzo will clear during the course of Friday morning with some sunny spells developing in the afternoon. Highest temperatures of 15 to 18 degrees. It looks set to be dry at first on Friday night but outbreaks of rain will move in from the southwest later. Minimum temperatures of 9 to 12 degrees in moderate southeast winds.