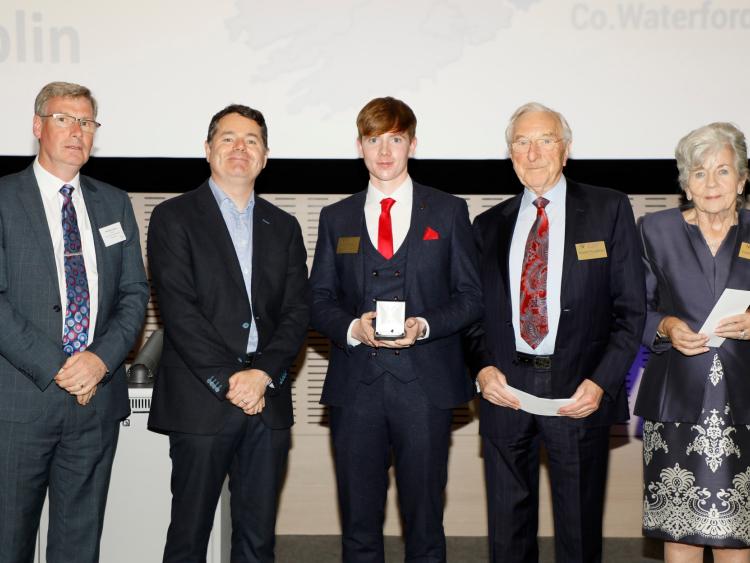 On Saturday, September 21, Waterford Student Ethan O’Mahony was awarded a Naughton Foundation scholarship worth €20,000 at a ceremony in Trinity Business School in Dublin.

The award was presented by founding patrons of The Naughton Foundation, Dr. Martin Naughton and his wife Carmel who were joined by Mr. Paschal Donohue TD, Minister for Finance, Public Expenditure and Reform.

Supporting academic and innovative excellence in Irish students, this Scholarship Award is an investment in the future of Ireland's reputation as a country with outstanding graduates. A former student of the Ardscoil na Mara, Tramore, Ethan has accepted a place at Trinity College Dublin studying Mathematics and he joins 36 exceptional Irish students who were awarded third level scholarships towards their studies in the areas of engineering, science and technology.

Ethan’s former secondary school, Ardscoil na Mara was also presented with a prize of €1,000 on the day towards their school’s science facilities, for their support of these students. More than 200 schools have benefited from this prize to date with some schools receiving it on more than one occasion. Last year’s winner was Mick Devine from St.Augustine’s College, Dungarvan.

Speaking about the growth of the programme over the past eleven years, Dr. Martin Naughton commented: “We started supporting students in their science and engineering studies in Louth, Meath and Monaghan in 2008 to give back to our local area. We never imagined what a wonderful community of connected young people the Naughton Scholarship program would become.

"It is heart-warming for us to read of their successes and how they are in turn giving back to society."

Since its establishment in 2008 scholarships worth over €4million have been awarded to more than 200 students, the scheme started in 3 Counties and has continued to expand annually to become a nationwide scheme in 2016. There is one guaranteed Scholarship (€20,000) for each participating county, with the exception of Cork and Dublin where there are two and four scholarships awarded respectively.

Five additional Scholarships are also to be awarded. Each Scholarship is worth €5,000 per annum for each year of a student’s three or four-year undergraduate degree.

This year sees the Naughton Foundation also invest further in ‘Science in a Box’. The programme runs for sixth class pupils for 25 weeks of the primary school year with PhD students spending one hour each week co-teaching with the class teacher, a specific aspect of the science curriculum.

For 2019-2020, The Naughton Foundation is delighted to continue its support of this program for 28 sixth classes in the Dublin, Meath and Louth region. The Naughton Foundation is also delighted to continue its support for the RDS for 2020-21 in delivery the ESB Science Blast Fairs. These Primary Science Fairs are inspiring entire classrooms around the country with incredible wonders of STEM and host annual fairs in Dublin, Limerick and Belfast open to every primary school in the country.