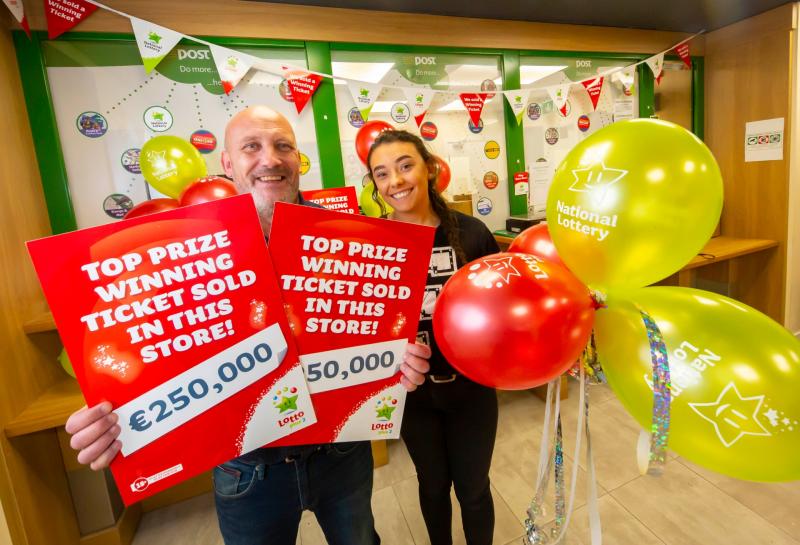 Postmaster of Abbeyside Post Office in Dungargan, Co. Waterford, Chris Mulcahy and daughter, Avril celebrate after they sell a winning Lotto Plus 2 ticket worth €250,000

It was another day and another life-changing win at National Lottery headquarters in Dublin as a delighted Waterford woman picked up a cheque for €250,000 after she won the Lotto Plus 2 top prize on Saturday, August 24.

Sitting in the plush surroundings of the National Lottery Winners Room, the Waterford winner admitted that she has kept news of her €250,000 windfall under wraps from her family and close friends but plans to make a surprise announcement once the dust has settled on her win.

“It’s all very unbelievable to be honest. Even though I had my ticket checked and it was confirmed as the winner, a part of me still thought that I was making a mistake. I didn’t want to get anybody’s hopes up at home but now, once I’ve seen the cheque with €250,000 written out in my name – I think it’s time to celebrate,” she smiled.

The winning Lotto Plus 2 Quick Pick ticket was purchased in the Abbeyside Post Office in Dungarvan, Co. Waterford. The lucky ticket is the latest special ‘white ticket’ to win a National Lottery top prize following their introduction in Post Offices and selected Postpoint retailers nationwide.

She added: “I haven’t told a sinner at home. When I left the house this morning, I said that I was going out for a few hours. They probably think I’m pottering around the town. Little do they know I’m up at the Lotto offices in Dublin picking up a cheque for a quarter of a million euros! I’ll organise a gathering of family and close friends over the weekend so we’ll make a proper celebration out of it.”

Also collecting a huge prize from the National Lottery today was a Kildare man who won a €40,000 on the €10 Money Multiplier 40X scratch card. The winner who also wishes to remain anonymous purchased his scratch card at Winkles Newsagent in Athy, Co. Kildare.

Want to share that winning feeling? Play Lotto. Tonight’s jackpot is an estimated €3.2 million. Play in store, on the National Lottery App or online by 7:45pm by this evening for your chance to win.

Nearly 30 cent in every €1 spent on all National Lottery games go back to Good Causes in the areas of sport, youth, health, community, arts, heritage and the Irish language. In total more than €5 Billion has been raised for Good Causes since the National Lottery was established 30 years ago.