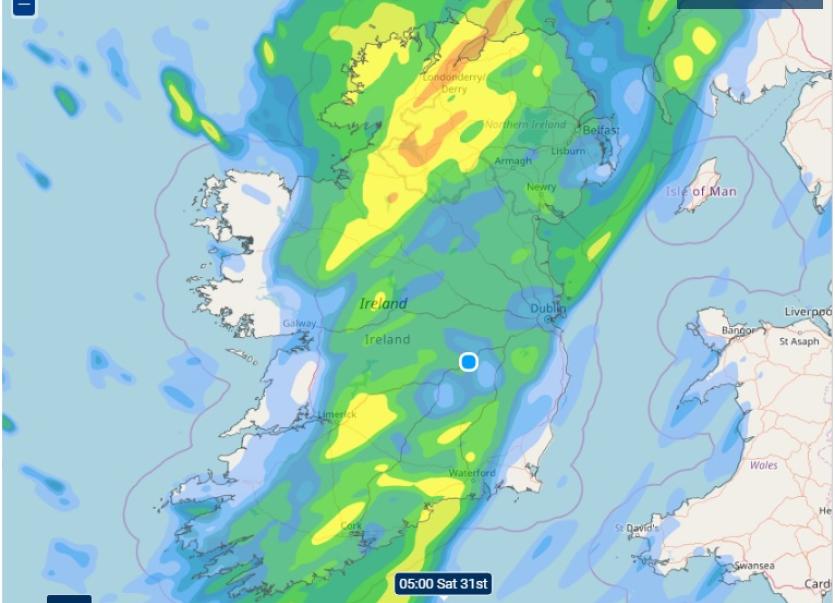 Met Éireann weather map for overnight Friday shows all of Ireland getting rain.

Met Éireann has issued a 12-hour weather warning with heavy and persistent rain set to sweep the country with western parts worst hit and at risk of flooding.

Thousand are expected to camp overnight at the Electric Picnic in Laois which is likely to experience heavy rain overnight.

Met Éireann's warning says the rain will turn heavy and persistent on Friday and Friday night bringing the risk of localised flooding. Rainfall totals of 30-50mm are expected during the period, higher in mountainous areas.

The warning is valid from 6am Friday, August 30 to 6am Saturday, August 31. DETAILED FORECAST BELOW TWEET.

TODAY - THURSDAY 29TH AUGUST
Blustery today with passing showers, these frequent in the west and north but more isolated elsewhere. It will be mostly cloudy but there will be occasional sunny intervals. Top temperatures of 17 to 20 degrees in fresh to strong and gusty southwest winds.

TONIGHT
Outbreaks of rain will develop in west Munster, Connacht and Ulster tonight, turning heavy and persistent towards dawn on Friday. Elsewhere, a good deal of dry weather but with the odd shower. Minimum temperatures of 12 to 15 degrees in fresh to strong and gusty southwest winds.

TOMORROW - FRIDAY 30TH AUGUST
Outbreaks of rain will extend to most of the country on Friday. The rain will be heavy and persistent in west Munster, Connacht and much of Ulster with the risk of localised flooding. The rain will be patchier elsewhere with decent dry periods, especially in the southeast. Maximum temperatures ranging 16 to 20 degrees in fresh and gusty south or southwest winds.

NATIONAL OUTLOOK
Friday night will be very wet with persistent and heavy rain for a time. Winds will be light to moderate inland, southerly first and later westerly. Along south and east coasts it will be breezy for a time with fresh to strong southerlies. Lowest temperatures of 10 to 14 degrees.

On Saturday morning, it looks as though heavy rain from overnight will give way to bright or sunny spells and showers. Highest temperatures 15 to 18 degrees in moderate west to northwest winds.

The showers will become confined to Atlantic coasts overnight on Saturday. Lowest temperatures of 8 to 10 degrees in moderate westerly breezes but strong at times on Atlantic coasts.

Sunday will be a fresh and cool day with sunny spells and scattered showers. Some of the showers will be heavy, especially in the northwest. Highest temperatures just 14 to 17 degrees with moderate to fresh west to northwest winds.

Early next week: largely dry and bright, some rain possible on Tuesday. Temperatures around normal.