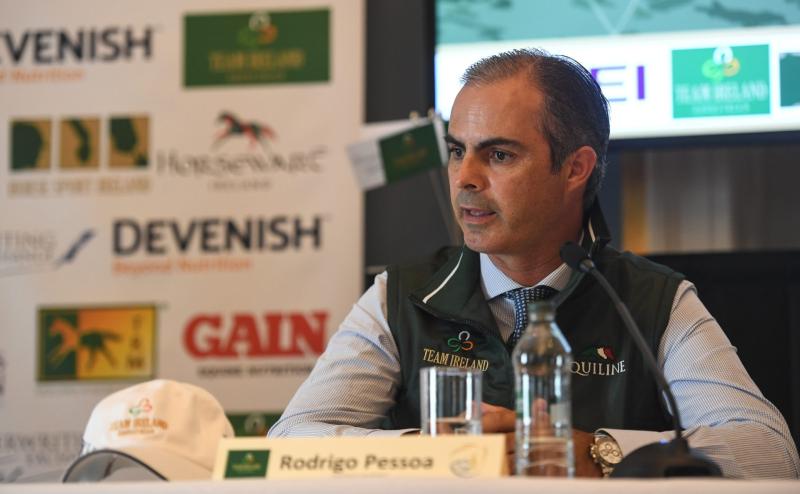 Rodrigo Pessoa, pictured above, has named his Irish Show Jumping team for Wednesday's opening competition at the Longines FEI European Championships in Rotterdam (NED) where three coveted Olympic qualifying places will be decided over the next three days.

Ireland, sponsored by Devenish and The Underwriting Exchange, will line out as follows:

Peter Moloney and Chianti’s Champion will be the second combination into the arena when the competition starts at 1pm Irish time. Cian O’Connor and PSG Final will be No.21, Shane Sweetnam and Alejandro are No.36, while Darragh Kenny and Balou du Reventon are No.54.

The 2018 World Equestrian Games saw USA, Sweden, Germany, Switzerland, The Netherlands and Australia take the six Olympic places on offer. A titanic battle is on the cards over the coming days with several top European nations still looking for an Olympic place. Recent Aga Khan winners Britain, along with France, Belgium, Spain, Italy, Austria, Portugal and Ireland are all hoping to secure one of the three Olympic places on offer in Rotterdam.

The 2019 European Show Jumping Championships get underway at 1pm Irish time tomorrow with the opening speed competition. The first round of the team competition takes place on Thursday before the team medals and Olympic qualification places are decided this Friday. The European individual final takes place on Sunday.

Ireland also has a Para-Dressage team competing at this week’s European Championships however their competition is an Olympic qualifier. Ireland is represented by Tamsin Addison with Donna Siesta, Rosemary Gaffney with Jean Werona and Michael Murphy with Skjoldsgaard Hippo-v.

The Irish Dressage team qualified for the Olympics for the first time in history on Tuesday, while the Irish Eventing team booked their Olympic ticket at the 2018 World Equestrian Games in the USA.

The Longines FEI European Championships are shown live on FEITV.