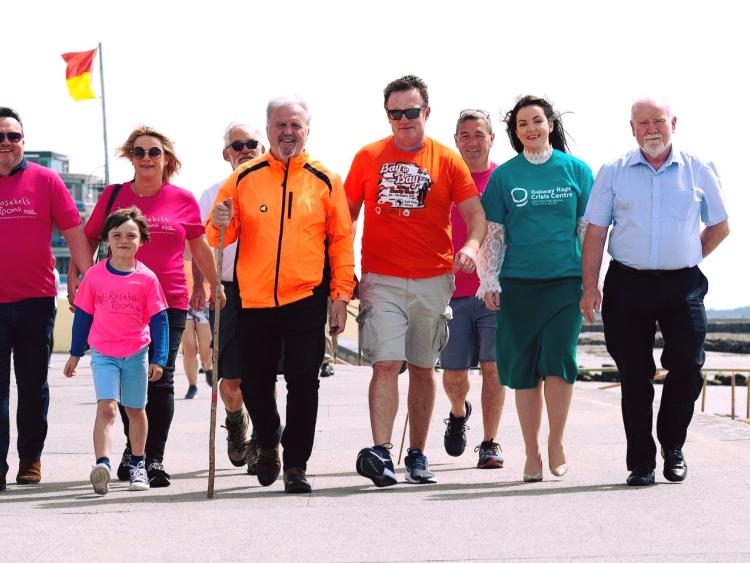 Man to walk from Waterford to Galway for three charities

Offaly and adopted Galway man Ronan Scully will put his best foot forward with some of his lifelong friends again this year, as he celebrates his 52nd year and his 27th year working for various causes in the developing world with Self Help Africa.

Ronan Scully is using his 52nd birthday in August to do what he does best too, as he aims to raise much-needed funds for some worthy causes especially Self Help Africa and some charities close to his heart, helping children and young people in need in Africa and Ireland with a week-long ‘Bay to Bay Walk.'

It will take him from Waterford/Ardmore Bay in County Waterford up along the middle of Ireland to his birthplace in Offaly and then across to his home in Galway, a mere 350km. This is the 3rd annual 350Km Bay to Bay walk through various parts of Ireland for charity.

The charity walk will enable him to celebrate two memorable milestones too, as he will also use the occasion to celebrate 27 years in the world of international development and charity.

Having worked for a number of years with Mother Teresa’s Missionaries of Charity in Calcutta, Ronan Scully then spent more than a decade in India, Nepal, Angola, Ethiopia, Kenya and Sierra Leone, and continues this work as a representative in the West of Ireland with Self Help Africa.

The upcoming 350km trip is a sort of Irish Camino for Ronan and friends and will start from the parish church in Ardmore Bay, Co. Waterford on Saturday, 17th August next, and will conclude with a 5k charity walk on the promenade in Salthill, Galway, on Saturday afternoon at 4pm on the 24th August.

All are welcome to join him at the Claddagh Hall in Galway to walk the Salthill Prom for this event and register at the Claddagh hall that day for the 5km walk and make a donation of €15 towards the charities or whatever people can afford. The walk will be followed by a BBQ at 6pm in The Galway Bay Hotel in Salthill with tickets selling at €20 with all proceeds going to the charities.

Offaly-born Ronan will be joined at different stages of the walk by family, friends and supporters, on his prayerful and celebratory journey up through the middle of Ireland and then across to the stunning and beautiful Galway Bay.

Ronan would like to thank those who have to date donated funds to the charities who will benefit from the walk - Self Help Africa, the Galway Rape Crisis Centre and Rosabel Rooms in partnership with The Irish Hospice Foundation and for anyone who supported the Bay to Bay walk over the last few years since its inception.

“We have a number of social events and gatherings arranged along the route, and there will be various sportspeople and others joining me at different stages of the trip,” he said.

A former RTE Operation Transformation finalist, Ronan Scully has organised races, walks, climbs, social events, charity galas, and fundraising expeditions too numerous to mention through the years, and even undertook a hike to the North Pole in aid of various charities, a number of years ago that was kindly funded by Richard Donovan, founder of the North Pole Marathon/Global Runnings.

Paying tribute to all who have supported him in his efforts over the past 27 years, Ronan Scully said that the upcoming cross-up country walk would give him a chance to say thank you to so many people who had supported him in his work with some of the poorest people, families and children on our planet.

“I am looking at it as a prayerful journey and a celebration – of my own milestone, the time that I’ve spent working for charity, and also of the many incredible people who I’ve crossed paths with in this line of work over the past 27 years and who gave so much of themselves so that we could help so many people, families and children in need around our world,” he said.

“The Irish people are amongst the most generous people in the world. I feel very blessed, privileged and humbled to be able to do what I do, and to know that so many people have been willing to give their time, their hard-earned money and their efforts to support a host of good causes.”

Participants are welcome to join Ronan at any stage along the route but especially on his final 5km walk along the Prom in Galway at 4pm on the 24th of August, or to donate directly to his appeal by contacting any of the charities or at ronan.scully@ selfhelpafrica.org  Also people are invited to a special charity BBQ on That Saturday evening in The Galway Bay Hotel from 6.30pm onwards.

Ronan is looking for support and generosity and donations for the three charities he is doing it for - Self Help Africa (For a Women's/Children healthcare project in Northern Uganda), Rosabels Rooms (in partnership with The Irish Hospice Foundation) and The Galway Rape Crisis Centre (For a support programme for people who have suffered).