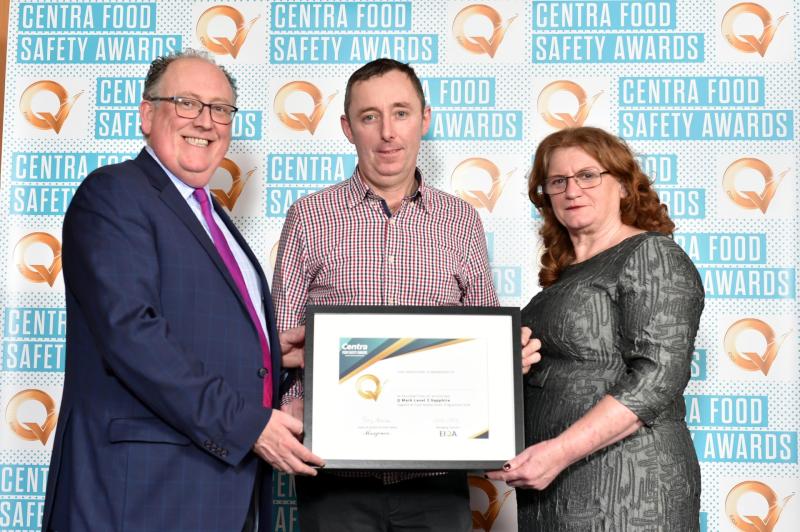 Damian McCarthy's from McCarthy's Centra, Waterford, at the awards ceremony

There were celebrations all round for 16 Centra stores in Waterford, as they were recently recognised for excellence in the fields of hygiene and food safety within their businesses, and graciously accepted distinguished awards at the 2019 Centra Food Quality Awards.

The setting for this prestigious awards ceremony was the Great Southern Hotel, Killarney, and during the course of the event the Excellence Ireland Quality Association presented a number of Waterford Centra stores, seven to be precise, with the coveted Q Mark Level 3 Emerald Award. The purpose of this award is to congratulate and acknowledge the ongoing dedication from stores to demonstrate exemplary standards of store cleanliness and hygiene. The winning Waterford Centra stores were chosen in recognition of their ongoing hard work and commitment in these areas and achieved a score of between 75 and 100% in this independent assessment. Winning stores displayed a comprehensive understanding of the importance of providing the best service for their customers, as well as ensuring that quality, hygiene and food safety are continually prioritised by their team of staff.

Also celebrating on the night were a further nine Waterford Centra stores, as they too were awarded for their commitment to health and safety within the Irish food sector, scoring between 60 and 74%. These businesses were presented with the Q Mark for Hygiene and Food Safety Level 2 Sapphire Award, which also independently verifies and acknowledges that the highest standards of operational hygiene and food safety were in practice that year in all areas of the selected convenience store.