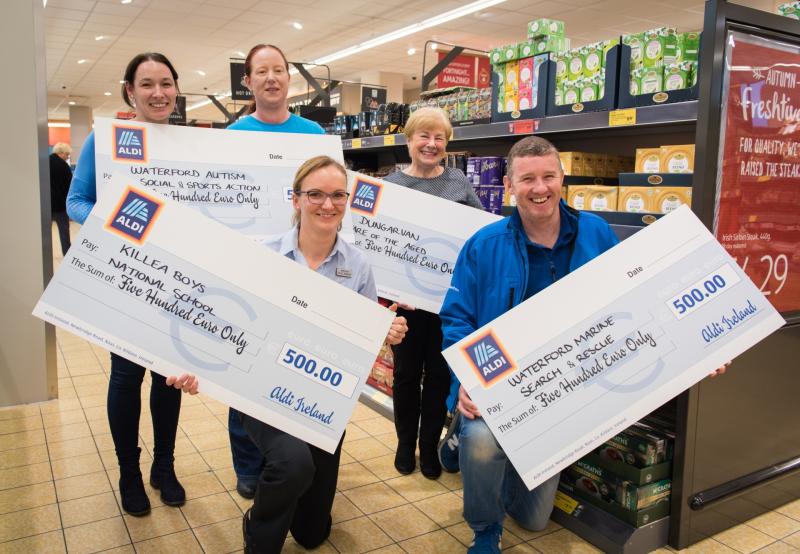 Four Waterford charities have benefited through Aldi’s Community Grants Programme in the last 12 months. A total of €2,500 has been donated to support local charities providing vital services throughout the Co Waterford community through the programme.

Now in its third year, hundreds of charities nationwide have been supported by Aldi’s Community Grants Programme, with over €200,000 donated.

The initiative provides each Aldi employee with the opportunity to nominate a charity, community group or not-for-profit organisation within their local community for support.

Nominated charities are assessed according to a defined selection criteria, with the organisation deemed the most worthwhile receiving a €500 donation from Aldi.  Each of Aldi’s 137 stores nationwide allocates a bursary.

Commenting, John Curtin, Group Buying Director, Aldi Ireland, said: “Each of the charities supported by our Community Grants Programme does tremendous work within their local community.  They are often staffed by volunteers, who give up their time to provide vital services to those in need, free of charge.”

“Supporting the local communities our stores serve is something that we truly believe in and we are happy to have contributed to so many local causes in the last 12 months. Selecting the charities to support is driven by our store staff, they know the local charities and it allows them to give something back to the communities they serve.”

Aldi’s five Waterford stores are deeply involved in the local community. Through Aldi's partnership with FoodCloud, its Waterford stores have donated over 86,000 meals to local charities to date, while as Foróige’s lead sponsor since 2015 it has helped support initiatives including the Aldi Foróige Youth Citizenship Awards and the Aldi Foróige Junior Baking Competition.