A chance to grow in faith in County Waterford 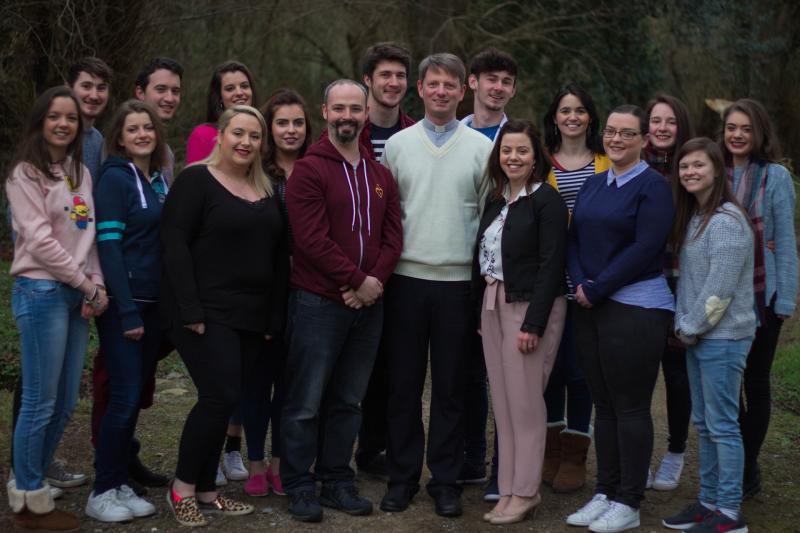 Fr Patrick Cahill pictured with some of those currently in Glencomeragh

Holy Family Mission at Glencomeragh in County Waterford is now in its third year and is going from strength to strength since its launch in 2016.

Back then, ten young people aged between 18 and 30 signed up for a year of faith formation and evangelization. In year two, that number has grown to 14 young missionary evangelists.

It all began through a providential meeting of Thurles man Fr. Patrick Cahill, a missionary priest and member of a new religious community, The Work of Jesus the High Priest, and Maura Garrihy, a vibrant young woman and a past student from Maynooth with a great missionary heart and a vision for renewal.

Both had experience in working with young people and had a vision for the youth to have a deeper relationship with the Lord. The two discussed the possibility of a place of formation where young people could come, not just for information, but a real living experience of Christ. They spoke about the daily program, missionary outreach, recruiting, and staff. They contacted Pat Reynolds, an experienced retreat giver and family man, who came on board with his talents as a speaker, catechist and actor. The core team was complete.

Then, Bishop Alphonsus Cullinan was approached and he was very favourable to the concept, but he said that they would need a property. They met a second time to clarify some details and, the following day, the Lord once again showed his generosity through a magnanimous gesture of a Rosminian priest. He was the custodian of a beautiful retreat centre named ‘Glencomeragh House’ and he offered the retreat centre to Bishop Cullinan.

Thus far, the Lord brought together a core team, a bishop, and a property. But in this day and age, who would come? With short notice, the team set about asking some of the young people that they had encountered over the previous years if they would be interested in doing a year with the ‘Holy Family Mission’. The national Youth 2000 festival was taking place that summer and so they promoted it there, and, somewhat miraculously, ten young missionaries started that autumn of 2016 after an interview and a short discernment process.

The new mission team and its missionaries, then, embarked on an epic tale of faith and discovery through prayer, study, community, and mission. Even though such an initiative was new (and not for the faint hearted!) the ‘Holy Family Mission’ had the wisdom of the saints to guide them.
However, giving a year to God doesn’t mean giving a year to hiding in the chapel! Through daily prayer and active community life, God reveals himself to the community while the community grows in understanding. The Holy Family Mission provides time for prayer, study, community life, work, recreation, with an emphasis on developing the whole person.

The community begins the day with Eucharistic Adoration, and Mass, followed by breakfast, wash-up, and study. The community studies from the riches of the catechism as part of their academic formation. The community has a diversity of members with a convivial atmosphere which contributes to their formation, to community development and to a spirit of service.

Participants are immersed in a rich spiritual formation process that includes Eucharistic Adoration, Mass, the Divine Office, the Rosary, and music. The fruit of this contemplation is shared with the youth of Ireland through the community’s missionary work that includes: faith formation, parish youth choirs, faith summer camps, outings, ‘Nightfever’ events, drama, and other activities according to the individual gifts of members.

The goal of all the time they spend in Glencomeragh is to form them for life-long mission. Also, the spreading of the Gospel is not confined to traditional means. Responsible use of social media is encouraged to spread the Good News of Our Lord Jesus Christ in order to meet the youth where they are at.

Mission can take place among their peers, in group chats or through personal conversation. However, mission is not confined to social media either, with teams of missionaries going to schools giving missions throughout the year.
Glencomeragh has a most beautiful garden also. With five wonderful ponds and a natural fountain facing the splendid Slievenamon, the site provides idyllic surroundings for reflection. The board walk is particularly beautiful and leads to a calming waterfall surrounded by greenery of all sorts.

The house itself was built in 1820. Four modern hermitages are strategically placed to attain maximum benefit from the unique views and panoramas.

The former Papal Nuncio Archbishop Charles Brown said that he considered it an honour to be present for the official launch of this new mission in the Church. ‘’Youth evangelisation is the most important task of the Church” he said, “[…] I consider the Holy Family Mission one of the green shoots in the Church in Ireland.‘’

The joy and enthusiasm of the young people is palpable. As one of the young students on retreat said, “I never knew my faith could be so joyful.” The truth of our faith sets us free. Let us pray and hope that the good Lord continues to call young Irish hearts to a deeper unity with him in the Holy Family Mission so that the renewal of the faith of this land can continue.