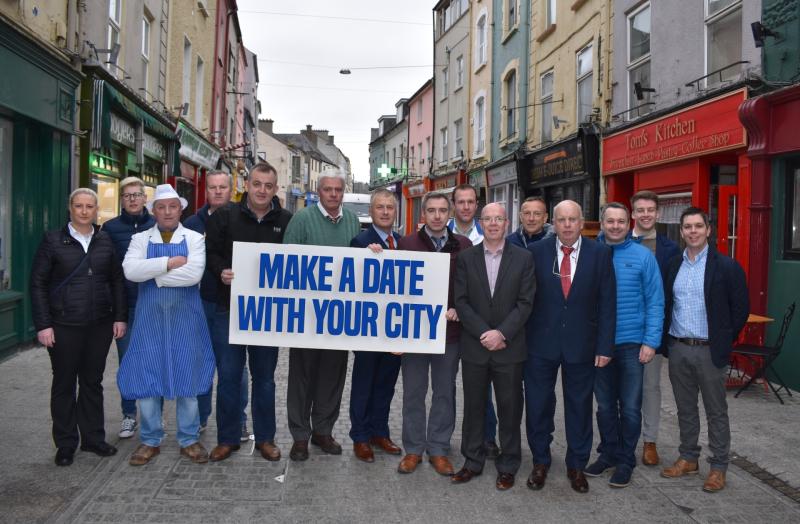 Fianna Fail Councillor Eddie Mulligan has joined forces with a number of city centre businesses on a new campaign urging people to “make a date with your city."

Speaking this week, Cllr Mulligan said that Waterford was in a “precarious position” right now and that the people of Waterford are going to have to start “getting behind their city in a consistent and meaningful way,” to stop the current downward trend of the city’s footfall and retail offering.

“Waterford’s future is on a knife-edge at the moment,” Cllr Mulligan said. “We are on the cusp of some monumental change with imminent investment being nurtured for the North Quays, City Centre and Cork Road areas. However, the local economy is still very fragile and many city centre businesses are continuing to report that trade is a challenge.”

Cllr Mulligan says that he has been attending too many of the “wrong type of meetings” lately.

“I’d much prefer to be attending meetings with outside investors, talking about Waterford’s massive potential, instead I’ve been meeting with current big-name retailers, trying to convince them to stay, and see out this difficult time in the city,” Cllr Mulligan said.

“I think something has to be done now; a concentrated effort to get more people into the city centre, particularly from the outskirts.”

Cllr Mulligan is asking people to “make a date with your city,” by arranging for meet-ups with friends in cafes, bars and restaurants as well as doing some shopping in some of our great local shops.

“The city centre is Waterford’s biggest employer with thousands of jobs depending on the support of the rest of the city and county,” Cllr Mulligan said.

“On your way to the shopping centre, gym or for that coffee, drop into your local butcher and pick up your chicken, get your bottle of wine in an independent off licence, your fish in an independent fish shop but most importantly support local independent businesses during this time of change. Give a little more to our local traders on your way to or from that weekly Supermarket spend!”

Cllr Mulligan says that the city’s politicians are working together to make the city “safer, better presented, cleaner and brighter” but “people power” is needed too.

“I know that Waterford’s recovery is happening at a slower pace to the rest of the country, but unless we become more proactive in the city centre, we are at risk of losing more vital businesses,” he said.

“We’re all on the same team here with the same goal – to live in one of Ireland’s best cities. If we can start to make more dates with our city, I guarantee you it will contribute to a massive change for the better.”