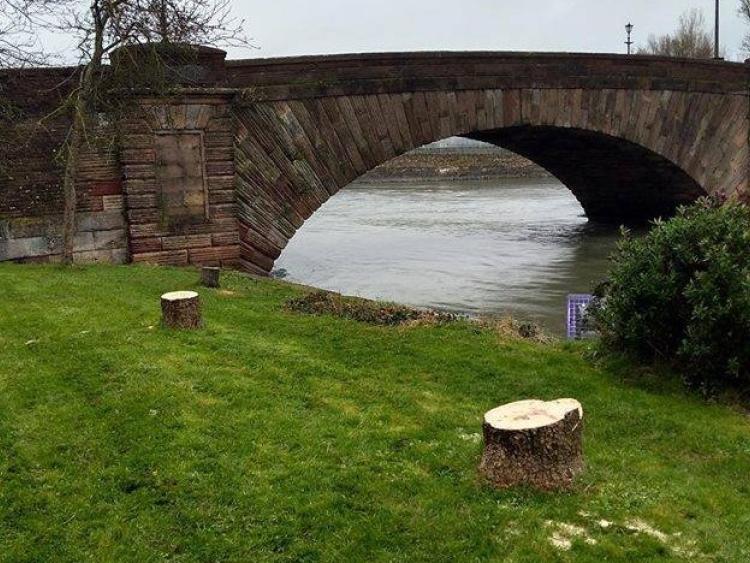 Waterford Council has responded having received numerous calls from councillors and the general public recently regarding the removal of trees adjacent to Devonshire Bridge in Dungarvan.

"Waterford Council sees trees as an integral part of the landscape and the planting of any tree ultimately adds and enhances the landscape." They denied accusations that considerations regarding the use of 5G in Waterford were the reason for recent tree removals in Dungarvan and the city.

"The main considerations for selecting a tree can very often be made on broad principles or within much more objective measures such as native selection; contribution to the landscape; fitting  for its environment and biodiversity contribution to mention a few.

The trees removed at Devonshire Bridge were one cherry tree; one sorbus and two cordylines.

The council has said: "The cherry tree was dead and required removal and the sorbus, for the greatest part, was dead and would ultimately fail this growing season."

"The cordylines, native to New Zealand, have been a hugely popular planting choice for seaside locations planted through the 80s and 90s, purely due to the fact of their ability to tolerate sea exposure. This was generally the only fundamental reason for selection and largely bypassing the points raised above."

"The two cordylines were removed to create the opportunity to enhance the landscape adjacent to the bridge. This now in turn creates a canvas for which we can make an added improvement where the space can now be planted with a much more suitable and iconic selection through the planting of arbutus unedo –  strawberry tree."

"This is a native Irish tree which would greatly contribute to this area and provide a biodiversity aspect to this location," a statement continued.

"Waterford City and County Council’s primary objective in relation to the maintenance and management of the trees within our city and county is to ultimately improve and create a safer healthier tree population."

"Trees are an integral part of the landscape and make a major contribution to the character and appearance of Waterford. However, the council recognises trees are a living asset and require maintenance and this maintenance is to ensure public safety and minimise hazards posed by trees. The type of tree work undertaken by the council largely depends on a trees location and its species. However, the broad spectrum of our works is underpinned by the health of the tree; road signs, traffic signals, street lights, and sight-lines for vehicles and pedestrians are obscured by the tree; if the tree is a contributing factor in causing structural damage, particularly to roads and footpaths, that cannot be reasonably addressed by an alternative solution."

"In the recent weeks and months, as in previous years, Waterford City and County Council has removed a number of trees across the city and county and pruned many more for the reasons identified above."

"In the majority of instances, residents living adjacent to these trees highlighted their concerns to the council and acknowledging where the item requires attention, the council has taken corrective action."

The Wildlife Act 1976 (as amended 2000) is the principle legislation protecting nesting birds in Ireland. This Act, under Section 40, prohibits cutting of vegetation on uncultivated land between March 1 and August 31.

"However, it is accepted in practice that street or urban trees are cultivated and this allows for tree maintenance works to be carried out during the closed period subject to best practice protocols in regard to pre-works assessment of trees for active nests or nesting birds and having regard to the initial issue in need of addressing," Waterford Council said.

"Another key element of the council’s tree maintenance programme is an annual tree planting programme and promotion of our National Tree Week. In 2018, the Council distributed 300 trees supplied by the Tree Council of Ireland to various Tidy Towns and Residents Associations and this was supplemented with 100 trees provided by Waterford City & County Council."

"Year on year an annual tree planting programme is implemented across the city and county by the Council where trees are selected based on suitability for each location. All trees planted by the Council are carefully grown through their formative years within a tree nursery bringing them to a developed stage at which they can be successfully transplanted into these various locations. These same trees across our city and county will become more identifiable in the coming weeks when they come into full leaf."

"We can also confirm that 5G was not a consideration in the removal of any trees in Waterford, nor are we aware of, nor have we any involvement in, any 5G rollout in Waterford," a statement concluded.