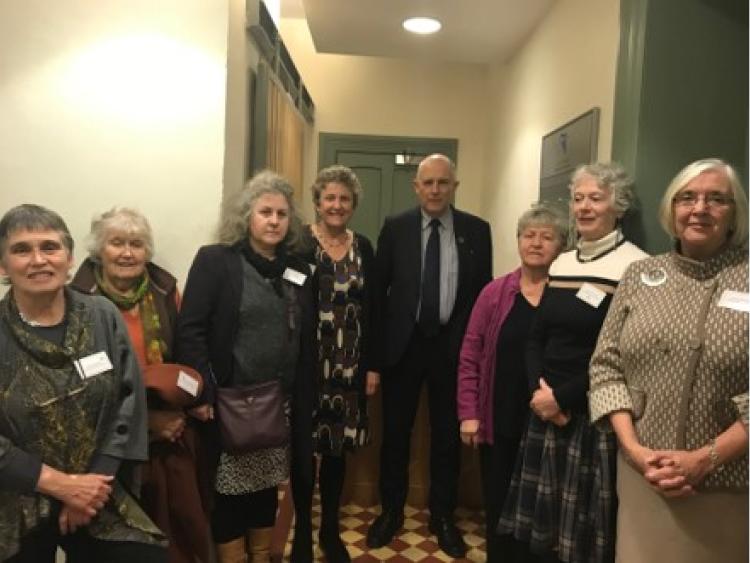 Members of the Lismore Welcome Project

The Lismore Welcome Project, the group behind Monday's public meeting on Lismore's participation in the Irish Refugee Protection Programme.

The meeting was targeted by protestors who took issue with the scheme and the proposed sponsoring and welcoming of a Syrian family into the Waterford town.

In a statement, organisers said: "Lismore Heritage Centre was convulsed by the tremors of anti-immigrant protestors from Dublin and beyond. At the former courthouse, the judges of old would have spent the whole evening banging their gavels if they had been in attendance."

Monday's meeting was attended by over 150 members of the public, most of whom were residents of Lismore and its environs. They gathered to learn more about the proposed new initiative for community sponsorship of one Syrian family to be welcomed and embraced into the community of Lismore.

"However, from the start, the meeting was constantly interrupted by about a dozen very vocal people from outside the area who spent the evening disrupting proceedings, whilst live-streaming it," organisers said.

“This is misinformation, disinformation and it is in fact downright reckless fake news,” she said.

Lismore has been chosen by the Irish Refugee Protection Programme, administered through the Department of Justice, to be one of a number of towns to run a pilot Community Sponsorship Programme. Based on the Canadian model, it is an initiative to support and help integrate refugees into communities in Ireland.

The public meeting was organised to inform the local community of the proposed scheme and to invite people onboard.

Guest speaker, David Stanton, TD, Minister of State for Equality, Immigration and Integration, explained the plight of Syria, where over four million people have either died, been displaced or fled the country since the start of the conflict.

He explained that the Irish government, as part of the European initiative in response to the crisis, agreed since 2015 to resettle 4,000 Syrians from UN Refugee Camps. Refugees will have spent many years in these UN camps undergoing the stringent vetting process required prior to being invited to Ireland.

Dunshaughlin, Co Meath, has recently sponsored a Syrian family under this pilot programme and Ciaran Murray of the Dunshaughlin Community Sponsorship Programme heralded the benefit to the whole community.

He was accompanied by their chosen family, the Al-Fakirs. Zuhair Al-Fakir said, “we were overwhelmed by the welcome and
outpouring of love that we encountered on our arrival and since.”

LWP was formed in November 2018 by a number of volunteers from the Lismore/Cappoquin area, who have been actively and independently supporting Syrian refugees in Clonea, Dungarvan and Cappoquin since 2016.

The formation of LWP was in response to an approach by Waterford Leader Partnership for the volunteers to spearhead the community response in Lismore and welcome a Syrian refugee family to the town later in 2019.

"The hoped-for Q&A session with panellists Eibhlin Byrne, Director of the programme in the Department of Justice, Fiona Finn of NASC in Cork and Jimmy Taaffe of Waterford Leader Partnership was totally overwhelmed by shouting and abuse."

Lynne Glasscoe talked about the project, its challenges and the volunteering opportunities, but "the constant haranguing from the protesters did not allow locals to ask questions or air their views," LWP said.

"The Q&A session was never allowed to happen and the meeting was concluded, after a supportive standing ovation from the local community."

Guests were invited to participate in refreshments. The protesters left and local residents then had an opportunity to talk with the panellists and speakers.

During the post-meeting tea and coffees, Eibhlin Byrne commented: “It is my sense that people went away from the meeting even more determined to show that Lismore is not a place of hatred or fear, but a place of welcome and warmth.”

Despite all the disruption, over 20 locals signed up to assist with the project and even more volunteers were promised.