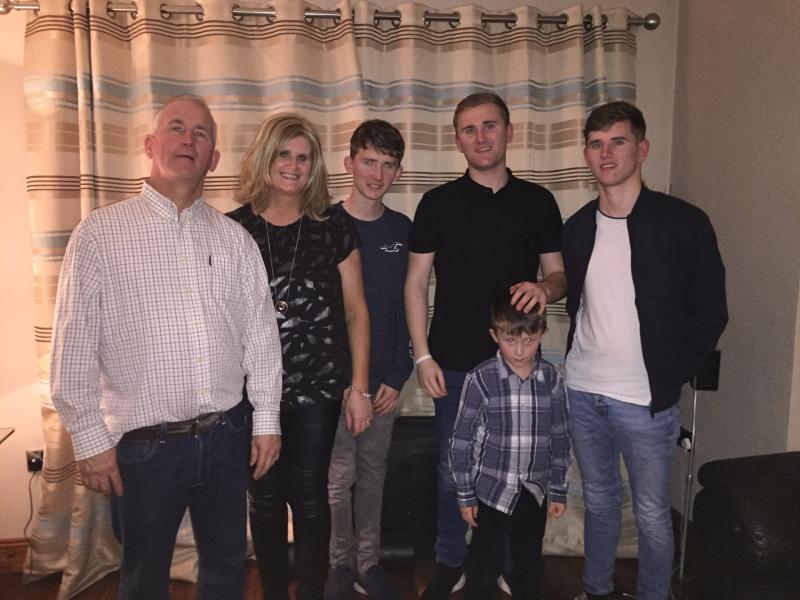 Annette Hahessy with her family

A South East mother currently undergoing breast cancer treatment for the second time has made it to the live shows on Ireland’s Got Talent.

County Tipperary's Annette Hahessy was part of the inspirational Sea of Change choir that left the judges in tears when they auditioned for the talent show in November.

The Dublin-based female choir - which is made up of cancer survivors and those touched by cancer from across the country- performed This is Me, leaving them “shocked” when they got put through to the live shows thanks to Denise Van Outen’s Golden Buzzer.

“The judges stood up with tears in their eyes the moment we started singing. We had the place rocking and everyone was so emotional. We couldn’t believe it when Denise pushed her Golden Buzzer because we weren't expecting our story to be that strong. They were all hugging us backstage - it was a really great day,” Annette says.

The 45 members of Sea of Change joined forces after meeting at a fundraiser last year for Aoibheann’s Pink Tie, a national children’s cancer charity set up following the tragic loss of an eight-year-old to cancer. Annette and her friends from Clerihan were among the 2,505 women who travelled to Magheramore beach in County Wicklow, setting a world record for skinny dipping while raising over €500,000 to support children suffering from cancer in Ireland and their families.

“It was a very empowering day because a lot of the women had cancer scars and others had lost a loved one to cancer. Led by Dee Featherstone, a group of the women got together after the Dip in the Nip and decided to start the Sea of Change choir. It all happened so quickly, and now we are rehearsing twice a week up in Dublin for the Ireland’s Got Talent semi-finals,” an excited Annette says.

Similar to her friends in Sea of Change, Annette’s journey to the bright lights of the popular Virgin Media One talent show has been heart-wrenching. Her life did a “somersault” in 2016 when she was first diagnosed with breast cancer. “I can’t even begin to describe how devastating and shocking it was when I found out I had cancer. It's unbelievable because you never think it’s going to happen to you and when it does your stomach flips out and the room starts spinning,” Annette recalls.

Annette underwent four months of chemotherapy, followed by surgery and radiotherapy. Owner of Tumbletots Playschool in Clerihan, Annette was just getting her life back on track when breast cancer returned last November. “Treatment worked very good for me the first time and I got two years of good health.

“I was just starting to build my life again when unfortunately it came back. I was driving up to Dublin to rehearse with Sea of Change for Ireland’s Got Talent when I discovered a lump on my neck. Given my history, I was paranoid and got it checked. I’m back getting chemotherapy down in Cork every Friday now, and I would need a magic ball to know what’s going to happen in the future. I’m not planning too far ahead, but hopefully things will go well,” a positive Annette continues.

Annette praises her family and friends for their support throughout her journey with cancer, in particular her husband George and their four sons. “George is by my side 24/7 and is living the fight with me. My sons Sean (23), Luke (20), Ben (16) and Michael (8) are amazing. My really close group of friends in Clerihan, and family in Clonmel and Dublin are also a huge support.”

Annette says being part of Sea of Change is “a great distraction” as she battles breast cancer and has made her “a stronger person”. She adds: “Ireland’s Got Talent has come at just the right time for me. There were days after getting the Golden Buzzer that I forgot I had cancer and had to have a reality check.

“Sea of Change has changed my life. Talking to the women about cancer is like talking to someone else about the weather and it has helped me to open up to people without shedding a tear. I don't know where all this inner strength has come from. Two years ago I would have been bawling crying, but I have really toughened up as a person.

“Cancer is becoming my norm. I’m trying to balance having chemotherapy with rehearsals but it’s worth it. I’m on a chemotherapy-free week ahead of the live semi-finals so I will have loads of energy. Hopefully we will go all the way to the final.”

Hosted by Lucy Kennedy, Sea of Change’s pre-recorded audition aired on Virgin Media One this month, receiving widespread acclaim from the judges. Denise Van Outen described Sea of Change’s audition as “so moving and so inspirational”, adding: “I’ve had a very turbulent two years with my best friend who was diagnosed with breast cancer, so what you just did meant so much and really touched my heart. I think you’re all fantastic and an inspiration, and you’re everything that this show is about.”

Jason Byrne praised the “fantastic” performance. “You’re all such brave women and I absolutely commend you. Denise was dead right to hit that Golden Buzzer - you deserve it.”

Michelle Visage said the Sea of Change choir are “changing lives”, adding: “We have all been affected by cancer and I lost my mother to cancer, so this was so moving to me in so many ways and I’m so glad that Denise hit the Golden Buzzer for you. That was such a body positive, inspirational number, so keep doing what you ladies are doing.”

Louise Walsh tipped the Sea of Change choir, who will star live on Ireland’s Got Talent at the end of March, to win it outright. “That was so uplifting to hear that song being sung by so many amazing people on one stage. It was a brilliant song, you're brilliant people and I'm going to say it now - I think you're going to win this competition.”