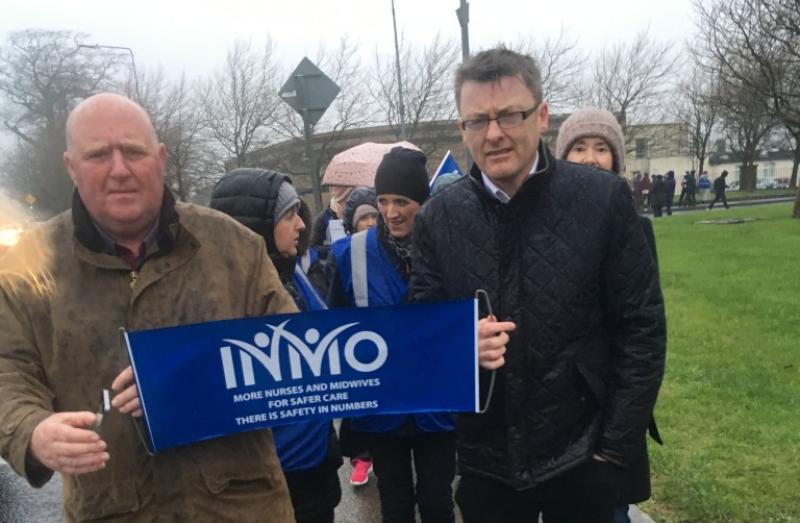 Speaking this morning from the picket line at University Hopsital Waterford, Sinn Féin TD for the county, David Cullinane, reiterated his and Sinn Féin’s support for nurses and midwives as they undertake further industrial action.

INMO members are on strike in order to get the government to engage with them to solve the recruitment and retention crisis affecting nursing and midwifery.

Deputy Cullinane said: “Nurses and midwives did not want to have to strike again today, they have been forced to strike. The action not only has huge support from the nurses and midwives of the Irish Nurses and Midwives Organisation (INMO), but it has massive backing amongst the public."

“I met with nurses and midwives on picket lines in Waterford and Dublin and all they all reiterated that they did not want to be on the picket lines, but they have been left with no option," he said.

“The government and their spokespeople wonder why nurses are striking – they are striking for better conditions, for a better health service, for respect, and for better pay."

“Fine Gael have had nearly eight years to address the nursing recruitment and retention crisis in the health service, but they have completely failed and the situation has deteriorated."

“Nurses, midwives, and their unions have continuously sought engagement with the Minister for Health and the Minister for Finance in order to address the core problems of staff shortages and pay in order to avert the escalation to industrial action, but meetings so far have been unfruitful due to Fine Gael intransigence."

“Nurses and midwives deserve our support and we should support them in their demand for a better health service which treats them as essential skilled workers with dignity and value - Sinn Féin stands in solidarity with nurses and midwives."