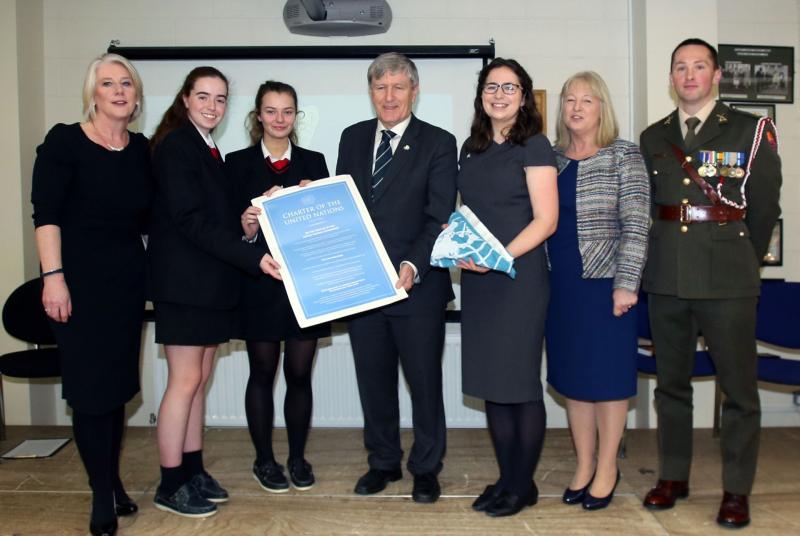 Presentation Secondary School  in Waterford was honoured to be selected as just one of 20 secondary schools across the country to participate in the trials of the Global Schools Programme.

Ciara Leacy was the first of the guests to speak, offering a great insight into the variety of work that goes on in the Irish embassies around the world. She also outlined the ambition of the Government to double Ireland’s impact by 2025.

Ambassador to the USA Dan Mulhall outlined the importance of the UN and the reasons why Ireland is a member, speaking passionately about the importance of playing our part in making the world a better place. He explained that this is for the benefit of the global community, but also because Ireland benefits when the world is peaceful and prosperous.

He recounted, with great charisma, his different and sometimes challenging assignments around the world and how Ireland’s view of the world has transformed.

He urged the students of the Presentation, as the upcoming generation, to take up the mantle and take on challenges such as climate change, conflict and the growth of the world population.

It was finally the turn of Commandant Tom Boucher to take his place on the podium, who demonstrated the hugely important work of the Irish Defence Forces and the missions that they have been involved in down through the years.

It was with great pride that the students learned about the 60 years of unbroken peacekeeping service that Ireland has given to the UN and how we are the only country in the world to hold this record.

Following a lively question and answer session, during which the ambassador answered questions on a number of topics that ranged from political neutrality to undocumented Irish people in America, the school was presented with the UN flag and charter.

The ambassador did not leave Coláiste na Maighdine empty-handed either and was delighted to be presented with the book about the foundress of the Presentation order entitled The Legacy of Nano Nagle.

Presentation's under 19 A basketball team hosts the All-Ireland play-offs on January 19. The school takes on on teams from Castleisland, Ballincollig and Castleblaney.

Best of luck also to the first and second year A basketball teams who begin their league campaign this term. The first year team will be captained by Louise O’ Sullivan and Róisín Brosnan, and the second year panel by Opeoluwa Olajide and Ayo Olukayde.

Well done also to Opeoluwa Olajide and Katie Whelan who have been selected for the under 15 Munster basketball panel.

In other sports, the first years had an enjoyable and informative series of lessons from Waterpark Rugby Club over the last few weeks, learning the basics of the game and working on their individual skills.