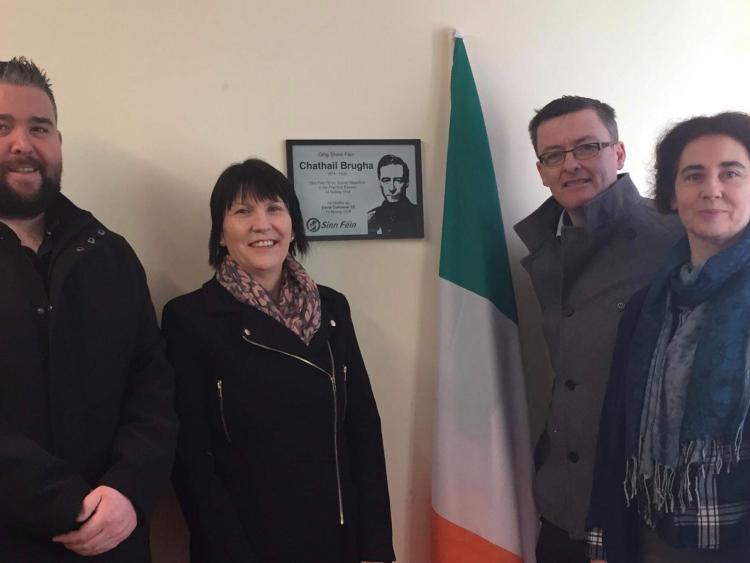 Sinn Féin has marked the centenary of the pivotal 1918 vote and the election of Cathal Brugha as the Sinn Féin TD for County Waterford on the 100th anniversary of the momentous event.

West Waterford Sinn Féin participated in a commemorative event at An Rinn, where wreaths were laid at the house in which Brugha and his family stayed during the turbulent times of the Tan War. Earlier in the day, current Sinn Féin TD David Cullinane unveiled a plaque dedicating his Dungarvan constituency office on Mary Street to the memory of Brugha.

“The general election held on December 14, 1918, saw a huge majority of the Irish electorate vote for Sinn Féin MPs and for the independence of their country. True to their election promise, the Sinn Féin MPs refused to take their seats in Westminster and those of them not imprisoned in Britain convened an Irish parliamentary assembly in Dublin’s Mansion House, which they called Dáil Éireann," Deputy Cullinane said.

“The people of County Waterford elected Cathal Brugha as their TD and put their faith in the Republic promised to them in the 1916 Rising. Cathal Brugha was a leading Sinn Féin figure and chief of staff of the IRA. He was a fluent Irish speaker and had a great affinity with An Rinn and An Sean Phobail. He was elected as the first Ceann Comhairle of the Dáil and shortly afterwards as Minister for Defence in the Republican government.

“The first Dáil was a revolutionary body. As well as overseeing the conduct of the war being waged between the IRA and British forces, the new Republican government began establishing its own institutions to guarantee justice and equality in the areas being liberated from British rule. It reaffirmed the 1916 Proclamation and expanded on its vision for freedom, democracy and equity in the form of the Democratic Programme document.

“It is fitting that in this decade of centenaries we pause and remember not only the seismic events of the period, but also the people involved and the dreams and passions that motivated them to take action. Cathal Brugha was a motivated man - he believed passionately in the potential of a united and free Ireland to do right by its people. For him freedom was not just the absence of foreign rule, but also meant a stake in the wealth of the country for all the people as well as the guarantee of housing, healthcare and education," Deputy Cullinane added.