'They are not toys': Gardaí urge Waterford parents not to buy children quad bikes or scramblers for Christmas 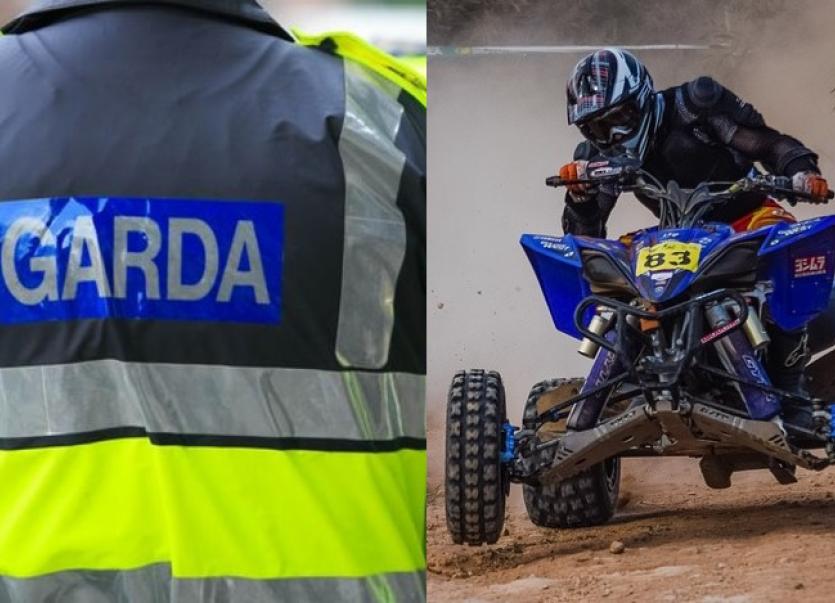 Waterford parents have been urged not to buy children quad bikes or scramblers for Christmas.

Three of the four people who died in Ireland as a result of an incident involving a quad bike or scrambler were aged 18 or under, in the period 2014 to 2017, according to provisional statistics published by the Road Safety Authority (RSA).

The RSA and An Garda Síochána have launched a new public awareness campaign to highlight the dangers quad bikes and scramblers pose to children and to urge parents not to gift them this Christmas.

The casualty figures also show that between 2014 and 2017, there were 39 people killed or injured in collisions involving a quadbike or scrambler on a public road. 16 or 41% were 18 years of age or under.

“The misuse of scramblers and quad-bikes is a public safety issue across Ireland and we can see the disastrous impact this can have on families and the wider community. The repercussions of anti-social behaviour arising from the use of these vehicles can be very serious, resulting in injuries and fatalities. That is why my Department is working with the Department of Justice and Equality, An Garda Síochána and the RSA to urgently address this issue," Minister for Transport, Tourism and Sport Shane Ross said.

Chief Executive of the RSA Moyagh Murdock said: “Every Christmas, these kinds of vehicles are given as presents, so it’s important people know the risks. Quad bikes and scramblers are not toys. They are intended to be driven by people who firstly inform themselves of the risk they pose and who are aware of the need for care particularly when driving on uneven ground. Scramblers are also a big problem in the hands of inexperienced and mostly unsupervised children, who are riding them around housing estates, local parks and on the public road, often with no protective clothing whatsoever. If you’re planning to gift a quad bike or scrambler this Christmas, please reconsider. If it’s the thought that counts, please think again.”

An Garda Síochána national roads policing unit assistant commissioner David Sheahan added: “We cannot emphasise enough that these are powerful MPVs and in inexperienced hands or on unsuitable terrain they have the potential to severely or even fatally injure someone. That is why they are unsuitable for children. The last thing anyone wants is a tragedy, especially at Christmas, involving one of these motor vehicles.

"We also must emphasise to parents considering buying quad bikes or scramblers for their children this Christmas that when used on a public road they are subject to the same rules as other mechanically propelled vehicles. They are required to be registered, taxed and in good road-worthy condition. The driver of the vehicle must hold the appropriate driving licence and be insured to drive the vehicle. It is also an offence for these vehicles to be used in public places such as parks. Recently a number of high profile collisions involving quad bikes and scramblers have featured in the media and clearly show the dangers of inappropriate use.”