Storm Diana to lash the country with rain and high winds 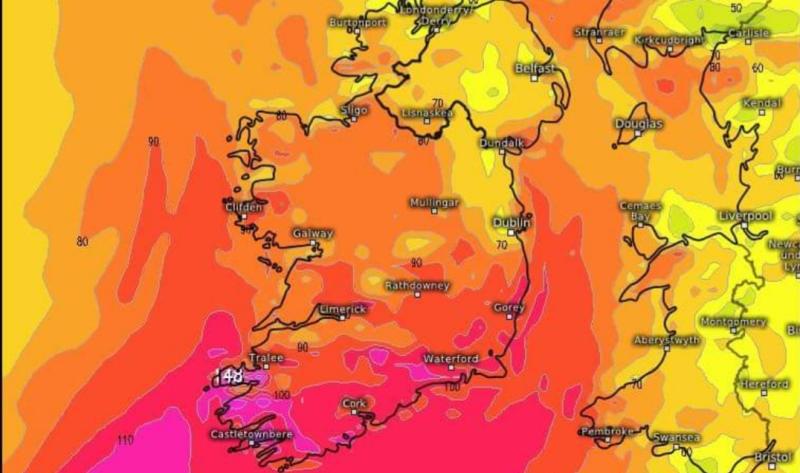 Met Eireann has warned that Storm Diana looks set to lash the country from Wednesday following another area of low pressure on Tuesday.

The national forecaster has already issued two Status Yellow warnings for rain and wind for much of the country for Monday night and Tuesday morning.

However, in their latest TV forecast, it is suggested that Status Orange warnings are likely as the week progresses with Storm Diana, already named by Portuguese officials, likely to make landfall late on Wednesday.

"Over the coming 48 hours we can expect our weather to turn very unsettled, with gale force winds likely in all areas, while storm force winds are likely off southern, western and southeastern coasts," the meteorologist said.

"During tomorrow winds across a large portion of the country may gust as high as 110 km/h with the strongest winds likely in southern, western and northwestern areas. Heavy rain is also likely with totals of up to 35 mm possible in some places."

"On Wednesday storm Diana, which has been named by the Portuguese meteorological agency, will begin to cross the country from the southwest. Winds from Diana are expected to reach up to 120 km/h over large portions of southwest Munster, with gusts of 130 km/h possible on coasts. Further inland winds will reach up to 110 km/h," Cathal explained.

"Some disruption to ferry services between Ireland and Britain is possible, with some flights possibly being delayed in Cork, Kerry, and Shannon Airports," he added.

He concluded by saying, "there also exists the possibility of a small, but intense low pressure system developing through Thursday, however details on this development are uncertain at present."