Meet the people behind one of Waterford most famous bakeries 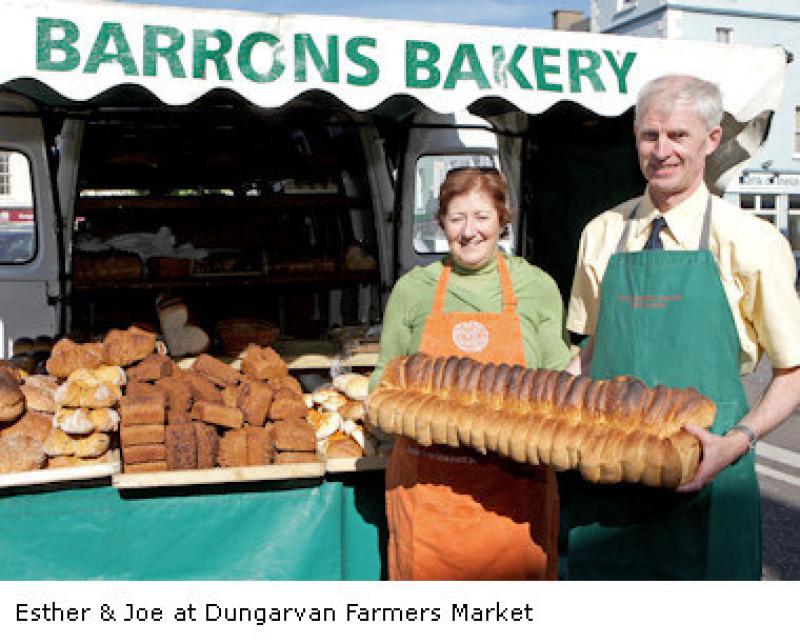 Meet the people behind one of Waterford most famous bakeries

Almost unbelievably in this day and age, Esther Barron is the fifth generation of the famous Barron Family Bakery in Cappoquin. As she says herself, “to be doing the same thing, in the same place, for five generations, is something else!”

“We’ve survived Civil Wars, two World Wars, economic downturns, bread wars and God knows what else,” Esther said in her own inimitably passionate way. “To survive this long, we must be doing something right.”

Esther and her husband Joe Prendergast are deeply passionate about what they do and it shows, not just in the amazing breads that they produce but also in how they talk about what they do, and the astonishing legacy that it’s built on.

“Everything in Barron’s Bakery is made fresh…we absolutely do not do frozen,” Esther said. “Our bakers work from 9-5, but that’s not the traditional 9-5…they come in at 9 o clock at night and work until 5am in the morning.”

To illustrate just how authentic, and fresh, Barron’s Bakery is, Esther tells a wonderful story of the day a tourist popped into the shop.

“Is everything made here fresh?” The tourist asked. “Of course it is,” Esther replied. “Sure I was made here myself from scratch!”

Like a fine ingredient, Esther was conceived, born and raised, not too far from the heat of a Barron Bakery oven. Baking is engrained in her and she loves nothing more than baking bread, and talking about the special methods that they use.

“Making bread is a very slow process,” Esther explained. “It’s all made by hand, so the bread is hand moulded and the secret ingredient is time. This patient process breaks down all the enzymes in the flour, which makes it more digestible and healthier for people to eat.”

Some of the produce that Esther is most proud of is, of course, their signature Barron Turnover, the Waterford Blaa, Soda Breads, Long Pans, Ring Pans, Basket Pans, Sourdough, Spotted Dog (white soda bread with spots of sultanas), Barmbrack and much more!

Barron’s Bakery is the epitome of Food the Waterford Way – five generations of amazing food where the only added ingredients are time, and passion.

Speaking about what the place means to her, Esther said, “when you know the person behind your Comeragh Mountain Chickens, or Lambs, or the baker in your local bakery, you know where your food has come from.”

“You know that every step in their process was caring and nurturing and if you have any issues, you can go right back to them and you’ll know you’re talking to the person who had a hand in producing that food. Also, you’re spending your money on local people. It won’t go back to Germany through Aldi, or to the UK via Tesco. It will stay right here in Waterford. Food the Waterford Way is about sustainability and gaining reliability from people who take pride in their food. It’s a way of life!” she added.

Asked about motivation, she continued: “I’m passionate about what I do. I grew up in a bakery and I loved it from the very first day. I then inherited the bakery from my father and I have to say, there really is no feeling like opening an oven and getting the smells and aromas of fresh bread…the crackling…it’s talking to you! There really is nothing like it.”