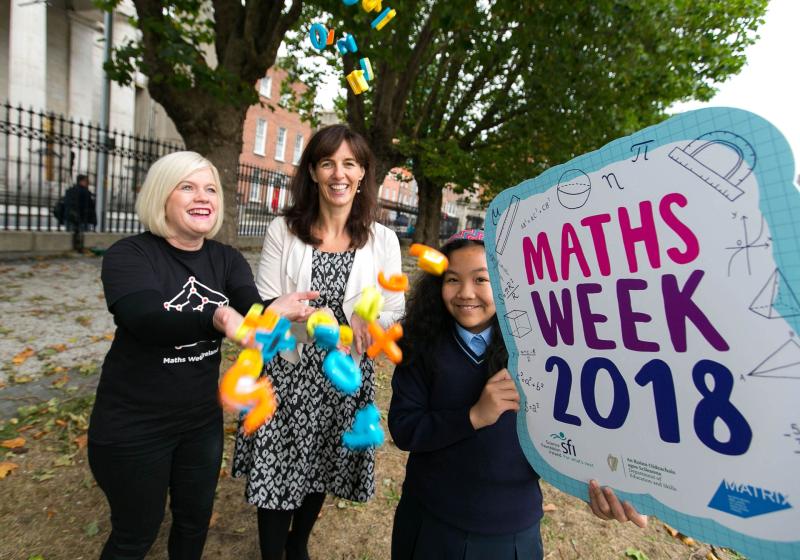 The 13th annual Maths Week, co-ordinated by Calmast at Waterford Institute of Technology, began with Maths in the City at Dublin’s St Stephens Green on 13th October and featured large-scale events including Maths in the City Belfast, Munster Maths and Science Fair and the Celebration of Mind at the Botanic Gardens Dublin. There were many important events such as the teachers’ MathsFest in Limerick and The Royal Irish Academy Hamilton Day.

Mid-week Maths Week events stretched from Dublin to Belfast, across to Donegal and down to Kerry, Waterford and everywhere in between!

One of the many highlights of the week was the presentation of the third annual Maths Week Ireland Award to Prof Anthony O’Farrell and Dr Fiacre Ó Caibre of Maynooth University who founded the Hamilton Walk in 1990 and together have established it as an annual event.

Sheila Donegan, Co-Founder, Maths Week said: “The success of Maths Week 2018 is a great credit to teachers and pupils around the island who organised fantastic events in schools. Thanks also to the partners who presented events across the island. It is estimated that almost 2 million people have engaged with Maths Week over the past thirteen years, helping them to have a more positive attitude towards maths."

"This is supporting interest in STEM-related careers among our young people and numeracy in society generally. The week is a true partnership of people working together for a common aim - a very important aim - to promote mathematics for all. We are already looking forward to next year’s Maths Week in October 2019.”

Maths Week Ireland is run as a partnership of over 50 public and private sector institutions and groups, including the universities, institutes of technology, professional bodies, libraries and visitor centres, committed to promoting an interest in maths, as well as many of Ireland’s flagship employers. It is an all-island event.

More information about Maths Week can be found at www.mathsweek.ie, or on Twitter @MathsWeek