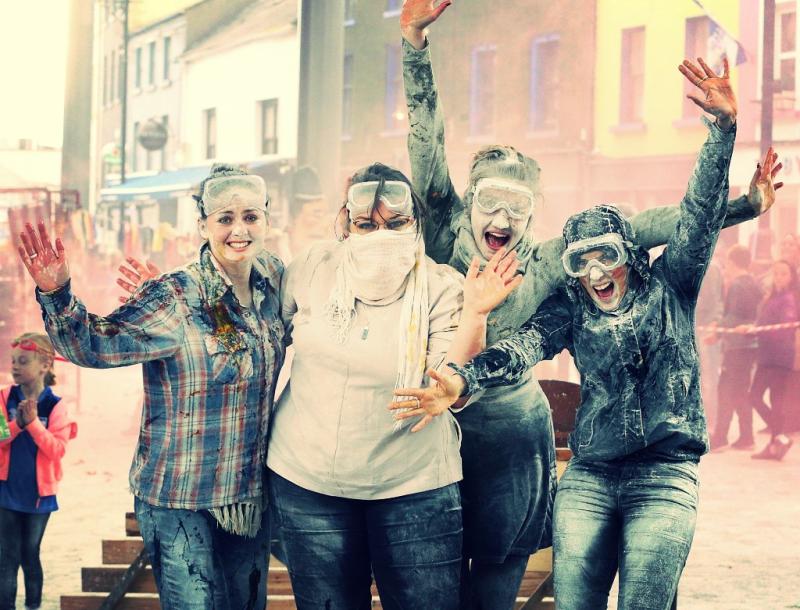 Imagine Arts Festivalgoers in Waterford are invited to take the streets of The Apple Market on Sunday, October 28 for what is sure to be the country's largest ever flour fight.

Free family fun is to the fore at the 17th annual Imagine Arts Festival as the free ‘Battle of the Blaa' is on offer at 1pm. Organisers say, "groups of the estranged blaa-ttlers will gather. They have dropped their Viking shields and swords and have picked up the flour and eggs for a display unseen before featuring tonnes of flour, thousands of eggs and google wearing families ready for battle."

‘BLAA-MAGEDDON' is just one of over 100 events on offer at the 10-day Imagine Arts Festival. Imagine Arts Festival offers a colourful international programme of performances including theatre, dance, music, visual art, discussion, and debate, alongside a strong focus on home-produced work from October 18th to 28th. Over half of these events are on offer free of charge.

The Horribly Historic Trails on offer from October 24th to 27th in the depths of the medieval alleys and streets of Waterford City. Take a tour and hear the stories hidden in the ancient walls, of those who have walked before. Meet the ghosts of the legends, Vikings, Kings, Vampires, and many more of those lost but not forgotten. The theatrical tour guides say “Be prepared for a spooktastical night of frights and delights as you will see Waterford City in a way you have never seen it before told through the eyes of all those who have walked through this city for hundreds of years.”

A variety of family fun and children’s events are on offer throughout the festival including, Puppet Making Workshops, Children’s book readings, a Viking Trail and lots more.

The 10-day Imagine Arts Festival in Waterford, which takes place from October 18th to October 28th promises an exceptional programme for everyone to enjoy. The 2018 festival is an exciting multi-disciplinary series of events that promote the best of local arts mixed with top national and international work. Some festival highlights include the John Dwyer Trad Weekend, Stomptown Brass’s ‘Requiem for the Truth’ featuring a raucous New Orleans style jazz funeral. The Waterford Writers Weekend this year which will be hosted by RTE’s Rick O’Shea and features interviews with some of Ireland’s leading literary luminaries including Authors John Boyne and Cecilia Ahearn.

A rare live recording of RTE’s Sunday Miscellany which celebrates 50 years this year; ‘Terakaft’ a Tuareg Rock Band from Mali; David McSavage’s new show ‘A Terrible Want’ and a Mayoral reception for esteemed Irish filmmaker and Waterford native George Morrison featuring screenings of his movies including the powerful and iconic ‘Mise Eire’ plus lots more.

The Imagine Arts festival is packed with over 130 acts & performances for all tastes and ages, join in the fun this October in Waterford from the 18th to 28th – see Imagineartsfestival.com