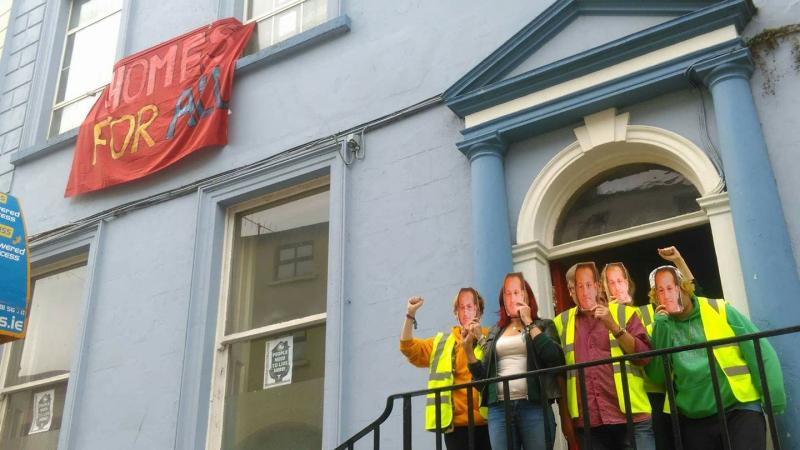 A group of homelessness activists have occupied a vacant building in Waterford in response to the ongoing housing crisis.

The 'Take Back the City Waterford' group began their sit-in on Friday morning, planning to stay for at least 24 hours in response to what they call "another increase in the number of homeless people" in Ireland.

The group said in a statement that "enough is enough" as they began their occupation of the council owned building on O'Connell Street.

This protest follows a summer of similar occupations in Dublin. The ‘Take Back The City-Waterford’ group are demanding the government and their representatives in the council take action to end the crisis. The group comprises of Community activists, Trade Unions, People Before Profit and the local branch of United Against Racism.

Local People Before Profit Rep, Una Dunphy said, "There is now over 10,000 people homeless in Ireland, including 3,800 children. More are in mortgage difficulties and more again are struggling to pay huge rents or living in substandard accommodation. The government have ignored calls from every corner of society to declare a national emergency and address the crisis."

"Housing Minister Eoghan Murphy issued targets last year, he said Waterford would build 687 new social houses between now and 2021. This is a ridiculously low number, but even so only 11 social houses were built last year. There are over 3,000 on the housing list in Waterford and it's growing with many eviction orders before the courts. There is over 110 people homeless in Waterford at present," she blasted.

Michelle Byrne, a local activist added, "The housing crisis is a direct result of the government choosing to allow landlords, private developers and vulture funds reap huge profits instead of building houses. This is a class issue. Many are being forced into homelessness."

She went on to say, "the Council need to take action and make use of the vacant buildings and build more social housing. Rents are skyrocketing too in Waterford as there are no rent caps in the same way there is in other cities. My own rent went up 15% this week - completely legally."

She said that this "is reflected by comments from Ivan Grimes, the council director of services in charge of housing in Waterford who said, 'the challenge is to get the property market buoyant enough so that new builds will become attractive enough again for developers."

"But the market is not responding with builds because it is designed to continue to stream profits to the elite few," Michelle Byrne added.

The activists' core demands are:

For the council to build affordable social housing on the land banks at Carrickperish and Kilbarry. Public Land should be used for Public Housing!

There are around 8,000 vacant homes in Waterford. We are calling on the council to invoke Compulsory Purchase Orders and use these homes!

We want to see rent caps introduced. This can be done by linking them to inflation. Homes are for need, not greed!

A public meeting has been organised for next Thursday, September 13 at 7pm in the Unite Union Hall, Keyzer St.

Speakers on the night are PBP Rep Una Dunphy, Michelle Byrne, USI Vice-President for Campaigns and an activist from the Dublin Summerhill Occupation and United Against Racism.

Members of the community are also being asked to join the National Housing and Homeless Coalition’s Demo outside the Dáil on October 3 at 12.30pm.