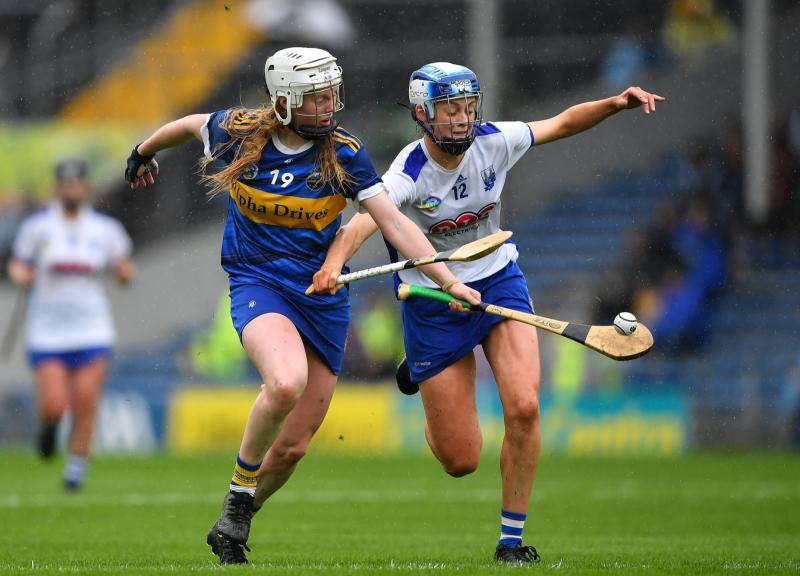 Niamh Treacy of Tipperary is tackled by Mairead O'Brien of Waterford during the Glen Dimplex Senior Camogie Championship match between Tipperary and Waterford at Semple Stadium in Thurles.

The Deise were full value for their victory, dominating the game for large spells and probably should have been more in front at half time as they did all the hurling with a slender three point lead greeting them at the break.

But as soon as the talismanic figure of Mary Ryan received her second yellow card at the start of the second half, it was all she wrote for Tipp as Waterford packed their defence and held on to what they had to see it out with relative ease, which will be frustrating for Tipperary players, management and supporters.

Waterford looked much the hungrier team from the off in this one, dominating early possession and fifty-fifty battles for possession and nearly had a goal within 60 seconds, when Beth Carton found acres of space down the middle of the Tipp defence before she set up Roisin Kirwan to shoot, only for her effort to cannon off the inside post.

But they made their early dominance pay in the first few minutes, taking a 0-2 to nil lead after five minutes from a brace of Beth Carton points - one coming from play.

Tipp were being swallowed up by Waterford jerseys anytime they came near a ball, and with the wet conditions making the first touch dodgy, Tipp were made to work very hard for their opening score with Nicole Walsh the scorer with a good finish from a tight angle inside the 21 yard line to get her side up and running in the ninth minute.

It was becoming evident that Waterford were well on top from here though, with Lorraine Bray, Clara Griffin, and the whole Waterford starting fifteen in essence winning their battles.

Mary Ryan was really struggling to get to grips with Roisin Kirwan at full forward with the Waterford player getting the upper hand with the battle, scoring two very well taken points in the 11th and 12th minute, along with setting up Sarah Lacey for her first of the day a few minutes later; Waterford now opening up a 0-6 to 0-1 lead.

Tipp have struggled for form this year and it was reflected in their performance in the opening quarter of this game, but steadily they started to come back into the game,  but were made to work very hard for every opportunity.

However, a trio of points on the trot from Ereena Fryday, Niamh Treacy and Grace O’Brien brought it back to two points after 20 minutes.

Much of that hard Tipperary work was undone soon after though, as Waterford struck for a goal in the 21st minute, when a cross field ball from Beth Carton put Abby Flynn one on one with Ciardha Maher, burning the Burgess Duharra player before rifling to the top corner past Aine Slattery.

To their credit though, Tipp settled down once again and clawed the game back to a one score game before the break, with some seriously well taken scores from Eimear McGrath along with a well struck Caoimhe Maher effort, had the game finely balanced at 1-7 to 0-7 in favour of the visitors at the break.

The opening exchanges of the first half mimicked the first half in general, with Waterford starting much quicker again to register the first three points of the restart through points from Beth Carton (two frees) and a Lorraine Bray effort,  as Tipp looked devoid of inspiration again.

Clodagh Quirke and Claire Hogan entered the fray soon after to try and make an impact, and Tipp pulled back two points in quick succession around the 38th minute, first with a fantasti solo effort from under the old stand from Niamh Treacy, before Cait Devane found Eimear McGrath in space to score off the back foot.

Things didn’t improve from there though, as Tipp were dealt a massive blow in the 40th minute, when Mary Ryan received a second yellow card for pulling Niamh Rockett’s jersey cynically when the ball rolled towards goal. Tipp now having it all to do with Waterford having 20 odd minutes with a numerical and scoring advantage.

It really was looking like an uphill battle for Tipp now, and Waterford were making full use of the extra player in the next few minutes, with Lorraine Bray and Niamh Rockett point in the 45th and 47th minute respectively to increase Waterford’s lead to 1-13 to 0-9.

Caoimhe Maher pointed in the 49th minute after Niamh Treacy’s blistering run gave her a sight of goal, but her hard and high effort was saved well by Brianna O’Regan in the Waterford goal with six points between the sides with ten minutes left to play.

Tipp tried hard to penetrate the Waterford defence on a few occasions as they looked for green flags to bring them back into contention, but with the extra player Waterford simply packed their third of the pitch to clog the space, and this left space for Niamh Rockett to exploit as she pointed from play in the 54th minute before she was denied a goal by Aine Slattery two minutes later.

Caoimhe Maher, Eimear McGrath and Niamh Treacy pulled the score line back marginally with late scores in added time, but it was a case of far too little and too late as Tipperary now face an uphill struggle to qualify out of their group in this year’s championship.