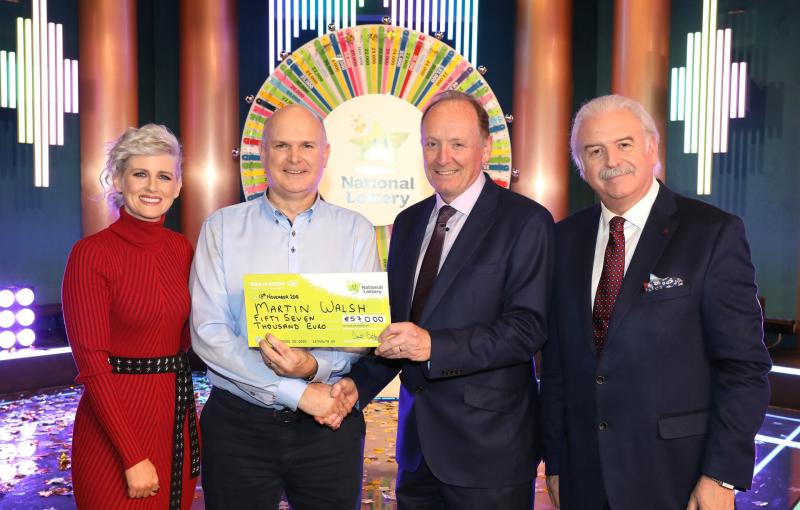 An IT worker, originally from Kilkenny, now living in Carrick-on-Suir on the Waterford-Tipperary border went on a Winning Streak of his own last Saturday, November 17, and spun the wheel, scooping a cool €57,000 from the National Lottery TV gameshow on RTÉ One.

All week, Martin Walsh was dreaming of spinning the iconic Winning Streak Grand Prize wheel. That dream became a reality as the Carrick-on-Suir based man won €25,000 on the wheel and a total of €57,000 from the show.

Martin has been married to his childhood sweetheart, Caitriona, for 27 years. They met at a children’s summer playschool in Carrick on Suir where they both worked as instructors.

Martin and Caitriona have three boys, Aaron (28), Lorcan (16) and Rory (13), who were all in the audience to cheer him on last weekend. Martin plans to put his Winning Streak winnings towards a college fund for Lorcan and Rory. Martin and Caitriona are also proud grandparents to 4-year-old Orla and they look forward to spoiling her also with winnings from the show.

A brand new-look Winning Streak scratch card is available in the 5,900 National Lottery retailers all over the country, where as well as the chance to appear on the Winning Streak TV game show if you get three stars, players will also be in with a chance to win some great cash prizes up to €5,000. The odds for those who purchase a Winning Streak to win is 1 in 1.76 to win a cash or three-star prize.

Players can also send their scratch card stubs into the National Lottery where each week, on the show, a player will be drawn as the winner of a Luxury Cruise for two valued at €5,000. The winner of this week’s cruise is Terri Madden from Crumlin, Dublin 12.

As ever one of the lucky five players will get the chance to spin the wheel and win up to €500,000.  But this series a €100,000 segment will be added to the iconic Grand Prize Wheel every show if less than that was won in the previous show, improving players chances to win a massive prize.