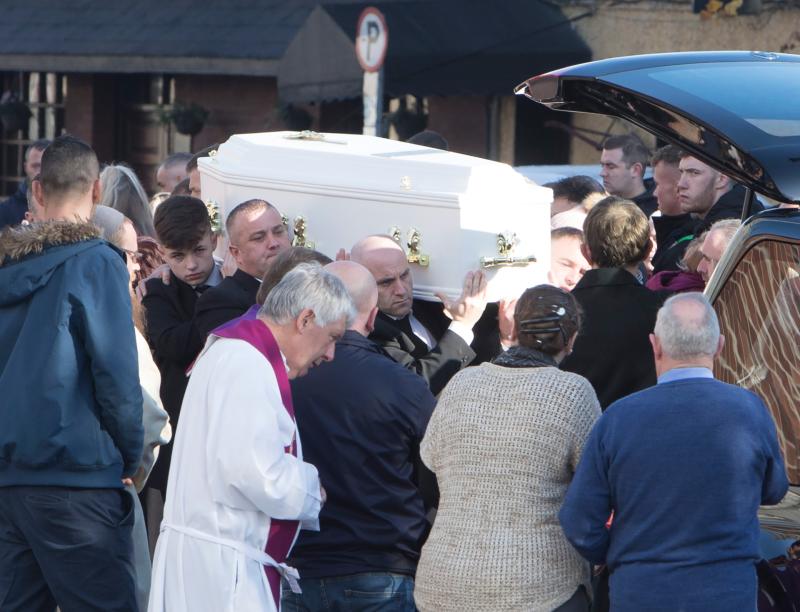 “I WILL hold you my heart until I hold you in my arms again. You are Daddy’s angel now, fly high.”

These were the words of the heartbroken father of 11-year-old Brooklyn Colbert, who died in tragic circumstances last Sunday.

Hundreds gathered at St Saviour's Church on Dominic Street, where Fr John Walsh, who described Brooklyn as a "child of Limerick" this Friday morning.

Family, friends, fellow pupils from JFK School and members of various sports clubs, in which he was a member, were among the hundreds who gathered at the Mass at St Saviour's Church on Dominic Street, led by Fr John Walsh.

Fr Walsh described Brooklyn as "a child of Limerick".

Speaking at the Mass, Brooklyn's father Wayne spoke of the pride he had for his son, as well as sharing some of his fond memories of the 11-year-old.

“Our boy Brook. You did nothing but make each and every one of us proud. You were your Mammy's boy and the apple of her eye. You had love that was forever and always. You were his everything, Sonia, and now he is your guardian angel.

“You were such a polite, well-spoken, gentle, caring and loving child. You never gave us struggle, except that one time you decided to do a runner from school and came home to play Fortnite with your best friend Jake

“Brook, I loved every day we spent together. You weren't just my son, you were my best mate. You made me proud. You made me the proudest father to see the boy you had turned into,” Wayne said.

Friends and family brought up a number of items as symbols for Brooklyn, including boxing gloves, a PlayStation controller, soccer boots and a soccer ball.

Wayne paid special thanks to Brooklyn’s family members, who sat in the front row to pay tribute to the young boy.

“Thomas, he loved you and looked up to you. Thomas, he will always be with you and as I told you yesterday, let's do him proud," Wayne said of Brooklyn's older brother.

“Brooklyn was a special boy who touched so many hearts. No more than his Nan Terry, he was her favourite and he knew that. From her morning cuddles to the holidays in Santa Ponsa, when she sneaked him onto the plane. I am forever grateful for what you have done, and the love you showed Brooklyn."

Wayne also spoke fondly of Brooklyn’s special bond had with his granddad.

“From the time they spent together, the laughs they shared together and the jokes they shared."

“He also loved his cousins and loved chilling out with them on the Playstation, with Robbie, Dillion, Daniel, and Dean.

“You minded little Tamera, like a baby sister. You were her big brother, 'Brookie-Cookie'. You protected her from everything. We will make sure Carter knows you, and how much you loved him.”

A special mention was given to Wayne’s recently deceased friend, Kevin Sheehy, as he asked the boxer to take care of his son.

The Irish champion boxer and Olympic hopeful, Kevin Sheehy, was killed in July this year.

“I want to ask Kevin Sheehy, the one boy I know in the next world who will mind him, because he was a king, a real king Kevin was, and I know he will look after my boy and mind him.”

There was barely a dry eye in the church as Wayne closed out his heartfelt speech.

“I just hope they have baked salmon, asparagus and mash on the menu in heaven because nuggets and chips will be handed back, they were never good enough for you. You lived your life like a king, and ate like a horse.

“My boy was too good for this world. All he wanted was his soccer boots and ball. He always told me, ‘I want to be the next Wayne Colbert, then one day he lost his glasses and went upstairs to play Fortnite because he couldn’t see the ball.

“What I would give to hear you laughing in the next room one last time. Until we meet again, my beautiful little gentle angel, rest in paradise, Daddy loves you always.

“I will hold you my heart, until I hold you in my arms again. You are Daddy’s angel now, fly high.”

This Friday morning, a man in his late 20s was charged in connection with the murder of Brooklyn Colbert.