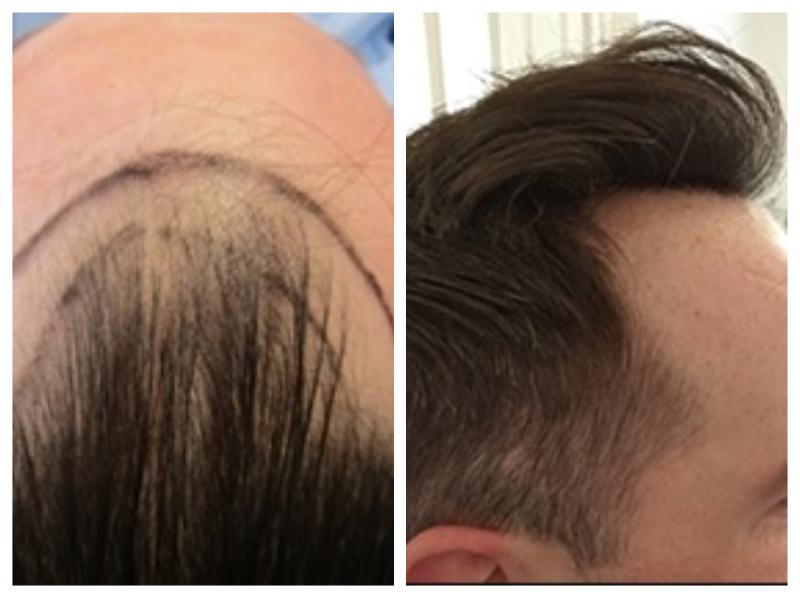 Tipperary's Joseph Guthrie before and after a hair transplant at Ailesbury Hair Clinic, Dublin

A County Tipperary man has opened about his hair loss "misery" and how going under the knife changed his life for the better.

Clonmel's Joseph Guthrie, of Get Your Locks Off, underwent a hair transplant at the Ailesbury Hair Clinic, Dublin.

He was suffering from androgenic alopecia, commonly referred to as male pattern baldness.

"Back in October 2016, I met a consultant at the clinic because it was affecting my mental health and happiness," Joseph tells WaterfordLive.ie.

"I had receded on both sides of my temples and it was getting harder and harder to hide."

Recalling the life-changing surgery, he says: "I was met by the head surgeon and her team. As I had some breakfast, the surgeon explained the procedure again. It was lovely to chat with everyone and it was reassuring that I was in the hands of an Irish-based award-winning medical team.

"I was brought down to surgery at 8.20am. It was all very relaxing. The anaesthetist gave me a pinch like the dentist but once I was numb I felt nothing. I was continuously asked if I was ok. While the medical team prepared for implantation to the temples, the nurse sat with me while I was having my brunch.

"Before I left, the surgeon sat down with me and explained the aftercare routine, giving me their personal mobile number if I needed to contact them. This was the deal breaker. I knew that I could call someone directly if I needed to.

"I was brought back down again to surgery for plantation, got a local anaesthetic and away we went. I couldn’t believe it was coming towards the end of it and how it wasn’t a big deal. I was out of surgery by 1pm. This was even with a 40-minute break.

"I can’t describe how I felt after having it done, only joy and that I should have done this a long time ago. Why did I leave myself in such misery? I wouldn’t go swimming in case my hair got wet and showed lightness.

"I have to say when I returned to work two days later, I didn’t make any bones about having a hair transplant. Quite frankly, I told people I had one, including clients who were doctors. They were amazed at the procedure and still to this day they even say how great it was. I saw results after fours months and at 10 months I had a high density reconstructed hairline," he says.

Joseph says the Ailesbury Hair Clinic was the "perfect fit" for his needs. The experience inspired him to qualify as a consultant trichologist, specialising in hair loss issues.

"I didn’t want a formal, impersonal treatment. I wanted a professional procedure but with a kind and caring approach, and that I was given at the Ailesbury Hair Clinic," he adds.