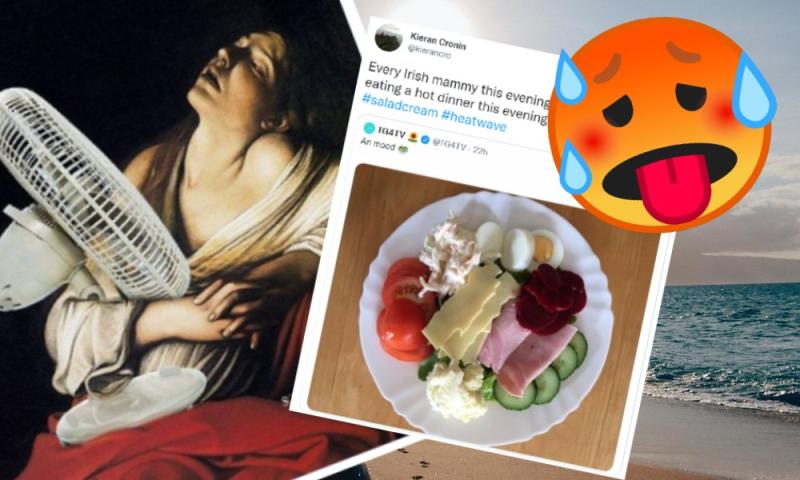 We've reached the point in time during every Irish summer when it's inexplicably a million degrees (or close enough to it) and not even a 99 or a blow-up paddling pool can take the edge off.

It's a time of Factor 50, farmer tans and bagga-cans, and with temperatures expected to reach almost 30 degrees this week, people all across Ireland will be looking for any way to cool down.

See how people are reacting to and coping with the heat:

the heat in ireland got me feeling like that one episode of normal people pic.twitter.com/LMLZN1ZFcO

We can all feel this one

Heatwave warning for irish people: DO NOT SIT ON LEATHER CHAIRS WHILE WEARING SHORTS. I've just stood up and my thighs are flayed.

The rest of us are dying, Kevin!

Another advantage to working from home during an Irish heatwave. pic.twitter.com/kwabNr2E42

This salad is unbeatable... hon the mammies!

Every Irish mammy this evening 'Yera you couldnt be eating a hot dinner this evening... il do a salad' #saladcream #heatwave https://t.co/7BFWGaAVxL

Spain? Is that you?

Listen to Sadhbh, she survived Australia.

For the Irish #HeatWave, here's what I learned in the Aus ones: when the weather is warm, a sandwich for dinner is completely acceptable. It's not like you need a big feed to keep your body heated. Cooking anything just heats your house up. Be lazy. Icecream and fruit is food.

Good luck finding a pack of these!

Finally got my hands on them. Just on time for the 2nd #heatwave pic.twitter.com/klPq12S8R3

This should come as a blue and grey duo - 'Irish Summer Sky' and 'Irish Sky'.

A semi-rare blue called 'Irish Summer Sky'. #crownpaint or #dulux could add it to their colour range. #heatwave #Ireland pic.twitter.com/qTHsDKofF9

If only we all had our own personal fan! I've one 90s era banger without its safety cover and the whole house is fighting over it.

Everyone in Ireland when we get a heatwave #accurate #heatwave #toohottohandle #lol pic.twitter.com/KUAKN9RPnf

A fur coat in this heat?

The only universally accepted weather in Ireland is "fierce mild".

God help you if you've no blackout blinds

Not often in Ireland you leave windows closed and blinds down to keep the heat OUT!

Not even the Italians can hack it

I'm from south Italy living in Ireland for 2 decades and for the life of me I'd never thought I'd say this...but it's too hot here now

Doing any manual labour for longer than two minutes in this heat is impressive!

Just went out to mow the lawn. Five minutes and gave up. It's just too hot out there. We're not used to this in Ireland.

Remember to keep pets cool by providing plenty of water and shade - if they're in a metal cage on top of a tower at any point, you're doing it wrong!