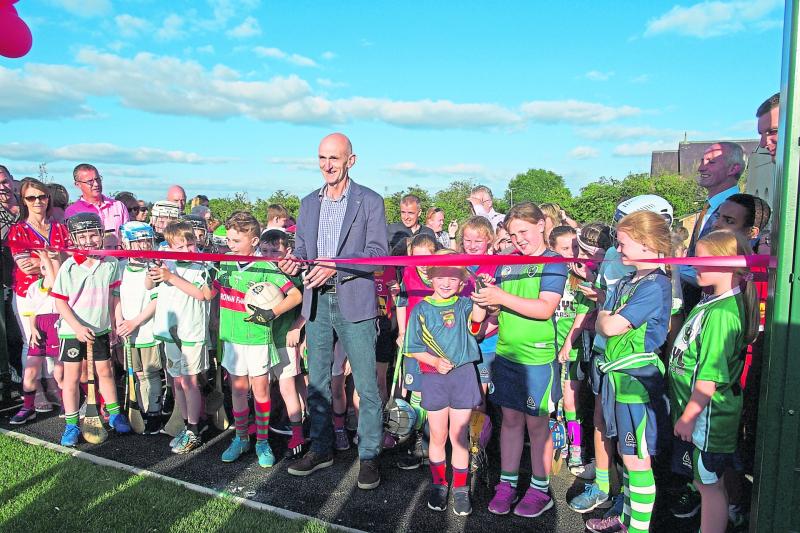 The community turned out in force in glorious sunshine last Saturday evening to celebrate the official opening of a €500,,000 all-weather pitch and amenity area beside Rathgormack Community and Hiking Centre in County Waterford.

Comeragh Amenity Area is located on a 1.5 acres site next to the Community and Hiking Centre and was developed by Rathgormack North Waterford Community Development Ltd, a company with charitable status formed by the local voluntary committee.

The people of Rathgormack and Clonea-Power raised close to €200,000 for the project through fundraising events and donations over the past six years. Waterford Leader Partnership approved grant aid of €200,000 and the development company secured an AIB bank loan to make up the balance.

Work on the all-weather pitch and amenity area began in November, 2017. However construction stalled in spring last year after the main contractor Northern Ireland based Crawford Group Ltd went into administration.

Earlier this year work resumed under a new contractor PST Sport which completed the project thanks to additional donations and loans raised in the community.
Speakers at the official opening who praised the community and the Comeragh Amenity Area Committee for successfully overcoming the set back.

Fr PJ Fegan of Rathgormack Clonea Parish began the ceremony by blessing the Comeragh Amenity Area.
Mayor Cllr John Pratt said it gave him great pleasure to celebrate this wonderful occasion. “I have no doubt the amenity will be a fantastic contribution to the community. It will further add to the natural beauty of this area in the heart of the Comeraghs as well as the other developments like the Hiking Centre, playground and local walking trails. It's this sort of development that allows communities to go from strength to strength.”

Cllr Seanie Power praised the great committee behind the project for getting it back up and running with the backing of the people of Rathgormack and Clonea. He paid tribute in particular to Comeragh Amenity Area Committee chairman Tony Bolger and fellow committee members Marie Cox and Johnny Brunnock for really pushing the project when it was going backwards.

Cllr Power also thanked the people of Rathgormack and Clonea who were never found wanting when it came to supporting fundraising events such as the Thorny Rose and the Mayor of the Comeraghs campaign.

Waterford Leader Partnership's Claire Connors said she was delighted to see the finished amenity area and expressed the hope it will serve young and old in the community for years to come.

Comeragh Amenity Area chairman Tony Bolger said the project surmounted a good few obstacles and he thanked the people of the parish for their help and support in raising close to €200,000 through fundraising efforts big and small and for rallying to the cause when it ran into trouble. He particularly thanked those local people who assisted them to complete the project through donations and loans. "We wouldn't have finished it without you," he pointed out, adding that donations are still welcome.

He thanked Brendan Phelan for selling the site to the community for its agricultural value; Waterford Leader Partnership for supporting the project when it went through a rough patch, Senator Paudie Coffey for his help, AIB and Community Finance Ltd for the loans.

He paid tribute to more than 50 local volunteers who helped with landscaping the amenity area around the walking track from donating the use of a mini-digger to weeding, planting trees and sowing grass.
Mr Bolger also praised the facility's designer Vincent Murray for his meticulous attention to detail and creativity.

"This is the end of one chapter but the beginning of another. We have so much done here and we feel this has so much potential. I appeal to everyone who has been involved to stay involved and if you are new to the area to get involved. Volunteers are the lifeblood of any community and we are fortunate to have them in spades," he concluded.

Shane Gough of Comeragh Amenity Area Committee presented an engraved plaque to Mr Bolger in recognition of his work as chairman the committee over the past six years. It will be mounted at the Community & Hiking Centre.
Presentations were also made to Brigid-Anne Power for her huge contribution to the community and Moll Drohan and Pat Bolger for their trojan gardening work in getting the amenity area ready for the opening.

After the ribbon cutting ceremony, boys and girls from the local GAA clubs played exhibition football, hurling and camogie matches on the pitch while the young musicians of Ceol Craobh Crotaigh played traditional tunes. The celebrations concluded with a barbecue and open air Hooley in the Hills ceili, which was part of the Comeraghs Wild Festival weekend.