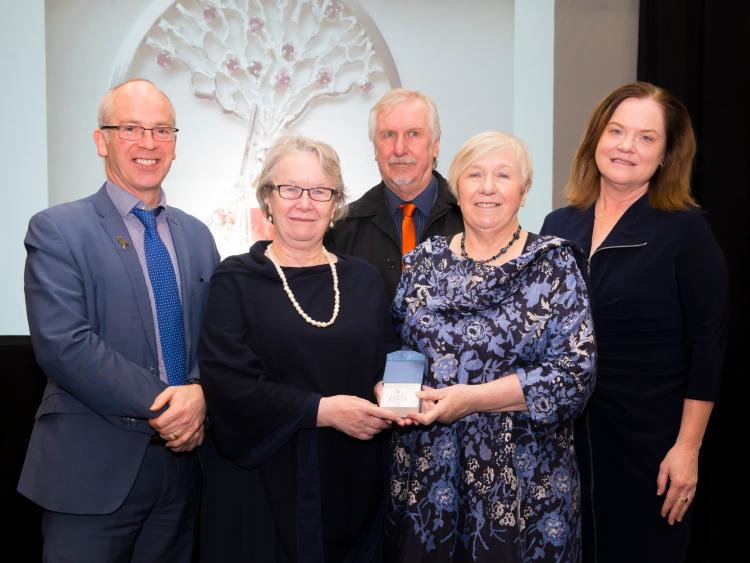 The family of the late horticulture programme leader Una McDermott were presented with an award named in her honour at Waterford Institute of Technology (WIT)'s Science Careers Day on Friday.

Una, who passed away suddenly in March 2018, was responsible for the development and running of the WIT BSc in Horticulture in both Kildalton College and in the College of Amenity Horticulture at the National Botanic Gardens Glasnevin.

WIT’s Department of Science look forward to presenting the Una McDermott Contribution to Science Award annually to an awardee who exhibits the dedication to science that Una exemplified.

Over the course of her 17-year career in WIT, Una drove forward horticulture education and advocated strongly for the education of mature students in the field. Una’s colleagues in the Department of Science remember Una fondly as her first anniversary approaches.

At the ceremony, Dr Orla O'Donovan gave an overview of Una’s educational and career path and how she was a champion of the adult learner.

She had trained as a horticulturalist in the National Botanic Gardens and worked as the OPW head gardener of the War Memorial Park at Islandbridge before graduating with a BSc in Ag Science (Land, Horticulture) in 1996 from UCD. This was followed by a MA in Museum Studies from the University of Newcastle upon Tyne (1997), where her thesis was Developing an Educational programme for the National Botanic Gardens in Dublin – factors to consider.

"Following this, she went on to work with Dúchas the Heritage service and for a brief time in Teagasc Kildalton College before joining WIT.

“In 2001, we were lucky enough to get Una as an academic staff member within the Department of Science at WIT and she was tasked with developing the BSc in Horticulture. Anybody who had any involvement with Una would have commented on her attention to detail and methodical approach which would have helped the programme and any activity she was involved with meet academic rigour,” said Dr O’Donovan.

Una then rolled out the WIT BSc in Horticulture in the National Botanic Gardens. “Not many people get to see their Masters proposal being an active product. It must have been very rewarding for Una to see the actual proposal that she had put forward actually coming to fruition.”

It is a great honour, said Dr O’Donovan, to award this Contribution of Science and have this award named after Una in coming years.

Dr Peter McLoughlin presented the award – designed and made by the silver and goldsmith Rory Donohoe who had trained Una in the craft– to Una’s siblings Eva Creely, Patricia Billett and Aidan McDermott.

Speaking on behalf of the family, Eva Creely said: “Thank you all so much for such and amazing piece which Una more than anyone else would have appreciated.

“We would like to thank you on creating this in award honouring Una’s contribution to science and the region. Of course we wish we didn’t have to accept this. It would have been much nicer if Una herself had been the recipient for her endeavours on behalf of horticulture, industry and academia but we can’t turn back the clock. There is no undoing the events of last year so the only thing is for us to look forward and take note and comfort from the achievements and the principles that underpinned Una’s work and life.

“Una was committed to working with nature to achieve a sustainable future for us all. Diversity was a key word for her. She was very much for using science and technology; as we discovered from the many hundreds of notebooks that she left behind. She observed, recorded, analysed in order to understand more and support ideas for going forward. She believed a rigorous approach could produce new and useful answers, the key being of course to ask the right questions. Ultimately, the value of the science and technology to us all is to ensure we are setting ourselves the right questions. That is your task now as students going forward, we want you to come up with the right questions.”

Eva also thanked Una’s colleagues at WIT, Teagasc Kildalton and the National Botanic Gardens, Glasnevin, for helping them to understand the impact Una had.

The Science Careers Day is an important annual event in the WIT calendar which brings together final year students and employers for a day of networking and learning about career opportunities. Nearly 300 final year students of the Land Sciences (Horticulture, Agriculture, Forestry and Agricultural Science) and the Laboratory Sciences (Pharma Science, Physics, Molecular Biology and Biopharmaceutical Science, and Food Science) met employers in the region and as in previous years, some students were even plucky enough to secure their first job interview.

Each employer who attended the event received a Careers Day Graduate Handbook containing information on final year students, including a short biography and contact details.