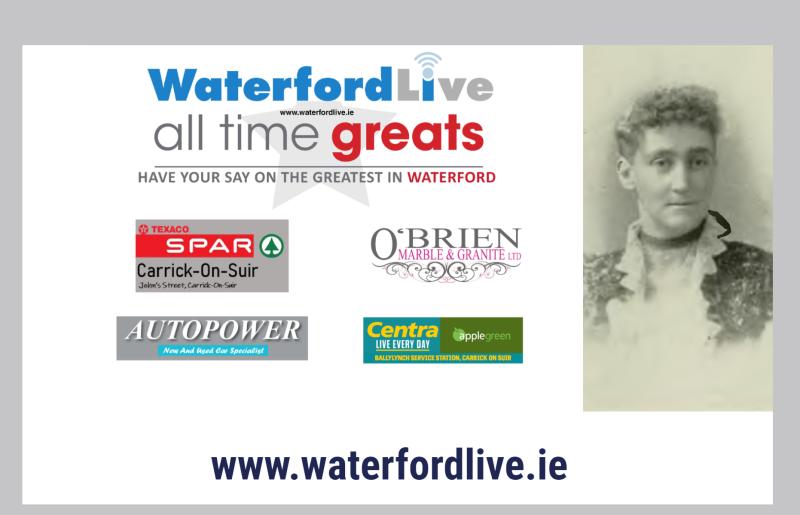 Born in Waterford in 1849, Moore was one of the first women to become a member of the ladies branch of the Land League and an important figure within the organisation.

Moore travelled through Ireland, teaching the doctrine of the Land League to prevent the eviction of tenant farmers from their holdings by landlords and help those already evicted.

In 1881, she was arrested and imprisoned in Tullamore Jail along with 13 other leading Land League ladies. Moore refused bail and served six months for her activism and outspoken views of the oppression of Irish tenant farmers.

The Ladies League were disbanded in August 1882 and soon after she moved to New York with her family of six children. She quickly became involved in politics and fighting the oppression of women, workers and Irish immigrants.

Marguerite remained an active campaigner for Irish nationalism, before and after 1916. She was involved in fundraising, public speaking and demonstrations to raise funds in support of an Irish republic.

In 1920, she led thousands of British sailors, New York longshoremen and staff on board transatlantic liners on a three and a half week strike organised by Waterford native Dr Gertrude Kelly to protest the imprisonment of the Cork Mayor Terence MacSwiney.

Among her many roles included vice-president of the Universal Peace Union, a member of the New York Woman's Press Club, and treasurer and secretary of the Parnell Branch of the Irish National League.