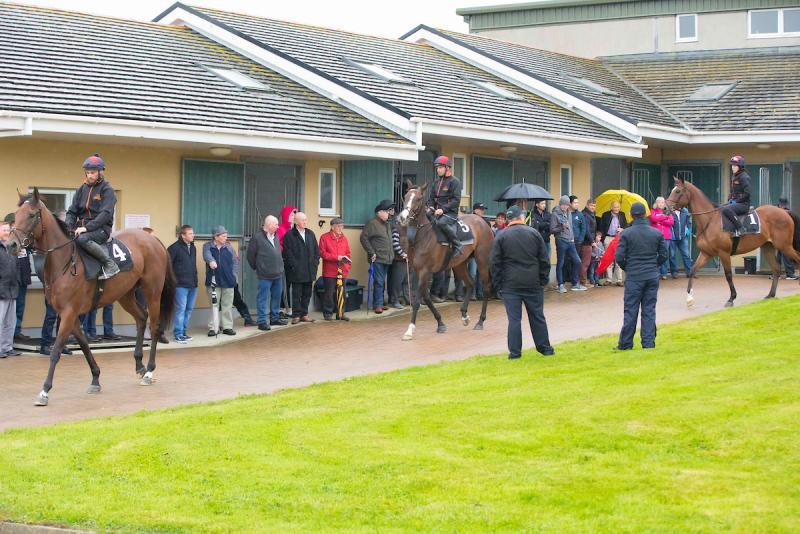 Racehorse trainer Eoin Griffin hosted an extremely successful open day on Monday at his picturesque Beacon Hill Stables located in Slieverue, on the border of Waterford and Kilkenny.

Overlooking the Barrow Valley, guests enjoyed a behind the scenes tour of Griffin's pristine racing yard where they saw some exciting prospects available for sale and enjoyed a proper racehorse owners experience at one of the countries’ finest facilities and an enjoyable day of racing thereafter at nearby Gowran Park Racecourse.

The morning event was very well attended, with guests enjoying a unique behind the scenes visit of one of Ireland’s most exciting racing yards. An owners experience like no other was relished by patrons from the time they arrived, first watching horses exercising on the gallops before hearing detailed feedback from this season’s leading National Hunt Jockey Rachael Blackmore. This was followed by an exciting swimming demonstration. Unlike many racing yards, regular swimming in the dedicated pool and trips to nature’s finest saltwater option at nearby Woodstown Beach is a unique benefit the horses in training at Eoin Griffin’s yard enjoy on a regular basis.

Patrons also saw an interesting scope procedure being performed by veterinarian Shane Ryan. A routine procedure that simply checks a horse’s upper respiratory tract to ensure the animal doesn’t have anything unusual present that might affect their general well-being and capability of running an upcoming race to their true potential.

The morning began with guests seeing the first lot of five horses being exercised. Exciting prospects for the season ahead seen by guests included Castletown Quarry, a five-year-old gelding who won a point-to-point last March and was subsequently purchased at the Goffs Aintree Sale. On his first run for the yard, he was placed 3rd in a bumper at Listowel. He is a really nice horse for the future and will hopefully in time develop into a nice chaser for connections.

Another eye-catcher was Riverdene, a seven-year-old gelding that was placed in a bumper and maiden hurdle last year. He will be ready to run towards the end of October when he should be competitive in novice hurdles this term. It looks likely that he may go chasing sooner rather than later.

Others that stirred great interest were I’m Charlie and Pink Rock. I’m Charlie is a four-year-old gelding and noteworthy as he is closely related to Our Conor, racing enthusiasts will see him appear in a bumper in the not too distant future. Pink Rock is a four-year-old filly and a full sister to Azorian. She is set to appear in a bumper in early October and one to look forward to for the season ahead.

A parade of horses for sale was presented very well by all the team, as existing and prospective owners enjoyed some light refreshments. The parade of horses and stable tour was followed by an informal chat and questions and answers session with Eoin Griffin and his head lass Elaine O’Donovan, facilitated by racing journalist Dave Keena.

Guests of Beacon Hill Stables then embarked on a trip to nearby Gowran Park Racecourse where they enjoyed complimentary admission and access to the members bar courtesy of general manager Eddie Scally and the board of Gowran Park to really complete the owner experience at the races and a truly remarkable day.

This initiative was kindly supported by the Racehorse Ownership Department at Horse Racing Ireland (HRI). A wonderful day was had by all, and Eoin Griffin and all the team at Beacon Hill Racing Stables would like to sincerely thank everyone who attended their open day and HRI for its support also. Goffs and Red Mills mementos were kindly presented to guests on the day which was much appreciated also. Speaking of his first open day experience since he began training in 2000, Eoin Griffin said: “I was delighted by the support and positive response from all in attendance.

"I am very proud of my excellent team, they have been a huge support in recent years and I am extremely grateful for their loyalty and hard work. We simply could not operate to the highest level at Beacon Hill without the support of our valued owners to whom we are most grateful. It was great to see so many of them here today and we look forward to welcoming more in the not too distant future.”

Anyone interested in racehorse ownership with Eoin Griffin who could not attend on the day can see a great deal of his pristine facilities online and private visits can be arranged by contacting him on 087-2931178.