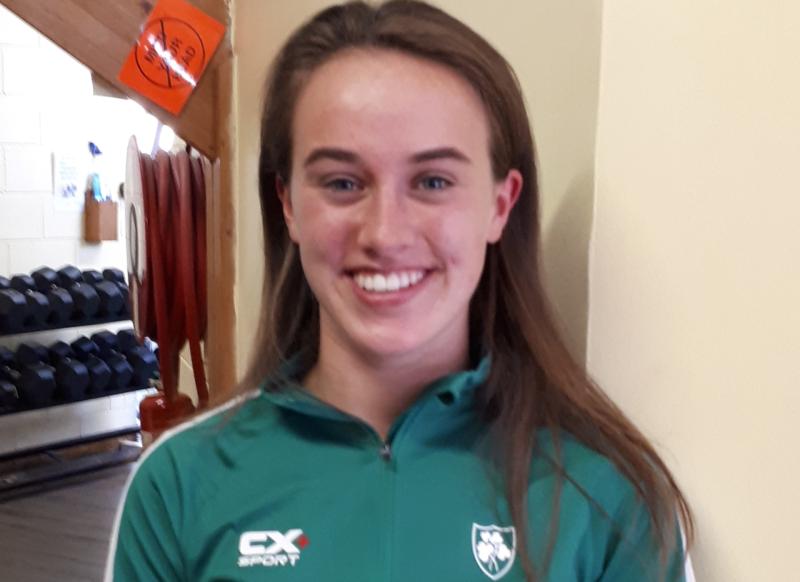 A “special” teenager from the South East with the “drive to be the best” will represent Ireland at the 2018 Youth Olympic Games in Buenos Aires, Argentina, next month.

Carrick-on-Suir’s Miriam Daly will fly the flag for Ireland in the women’s 400m hurdles race at the Youth Olympic Park Athletics Field on October 13.

Miriam will join Team Ireland, made up of 16 athletes competing in nine sports, as they depart for Buenos Aires next Wednesday. Awaiting them are over 4,000 athletes challenging for podium finishes in 32 sports.

With a haul of schools, Tipperary, Munster and national medals in her growing trophy cabinet, hurdles sensation Miriam is relishing the experience.

Miriam says competing against international athletes at the European Under 20 Championships in Italy and the European Youth Olympic Festival in Hungary will fuel her performance at the Youth Olympic Games. “I’ve learnt to control my nerves more, relax and focus on what I have to do and not worry about anybody else. My legs used to feel heavy when I got nervous and I still get a bit nervous before races. It’s all about putting tricks in place to control them and I’ve learnt to turn my nerves into a good performance,” Miriam tells Waterford Live.

Miriam’s training has become “more intense” throughout her teenage years, requiring extra dedication and sacrifice. The 17-year-old trains in a group of four at Carrick-on-Suir AC with other promising young athletes Jake Vermeer, Jack Pender and Rose Ann Fitzgerald.

“Every year we see what works and what doesn’t. I’m training harder than ever before, three or four days a week, but the breaks in between really help. The four of us are the older athletes at the club and train together. On Thursdays last year we met up with a bigger group down in Waterford who were older than us and that helped us to improve.

“Sometimes I can't hang out with my friends because of training but it’s worth it because not everyone can say they are going to the Olympics,” Miriam, the daughter of Ray and Marion, smiles.

The fifth year Scoil Mhuire, Carrick-on-Suir, student will spend the next week keeping loose and practising her hurdles and strides. She will have the support of her family in Buenos Aires while the country cheers her on from back home.

“I’m pretty much ready to go! I’m looking forward to staying in the Olympic Athletes’ Village - there will be four athletes in a room and it will be really nice getting to know them all. I am really going to enjoy the experience and take it all in.

“It’s nice knowing that my family will be there to support me, even though I might not get to see them before the race. It’s nice to know that afterwards if I need anything they will be there for me,” she adds. Miriam Daly will be cheered on back home by her coach Paul O'Gorman and Sean Kelly Sports Centre's Yvonne Power and Eileen Skelly. Miriam and her Carrick-on-Suir AC team-mates train at the athletics complex at the back of the centre.

Miriam’s coach, Paul O’Gorman, has been instrumental to her success. Paul says Miriam is a “special athlete”, praising her parents for their support in helping her stride to youth athletics stardom.

“Miriam has the drive to be the best, never misses training and has a fantastic attitude. I have seen athletes nearly as talented as Miriam but they didn’t have her commitment and work rate.

“Miriam is a special athlete and a lot of that is down to her parents. They are very good - everything she needs and everywhere she has to go to compete, there’s never an issue. You need that kind of backing from parents,” Paul says.

Paul feels the timing of the Youth Olympic Games will be challenging for Miriam. “Miriam is used to the big occasions now. Doing interviews after events and captaining Ireland have all helped with her development and she has taken the extra responsibility in her stride.

"The Irish athletes are taking on the best in the world and it’s not going to be easy for them because other countries are only starting or are halfway through their season, whereas we are finished our season. We’ve had a break, come back and topped it up," Paul continues.

Paul says the opportunities to travel and compete at the highest level in athletics are “unreal”, but admits it can be difficult to keep some promising athletes when they hit their teenage years.

“We’ve had athletes compete in Hungary, Italy, Germany, Belgium and across the world, but we have lost some of the boys in particular to soccer and hurling when they turned 13 or 14. They all find their own sport eventually and athletics training will stand to them no matter what sport they choose. The grounding they get from athletics training from 10 to 14 years of age - bounding, coordination and balance - is unreal. They are not getting that from the other sports.

“Miriam was just like all the other kids when she first came to the club and wasn’t outstanding by any means. She tried all the events, found her event, stuck with it and has progressed gradually every year since under 13. We have increased her training, structured to get the best out of her, and it’s a great sign that she keeps getting better.

“I am very proud of Miriam and the experience at the Youth Olympic Games will be brilliant for her,” Paul adds.