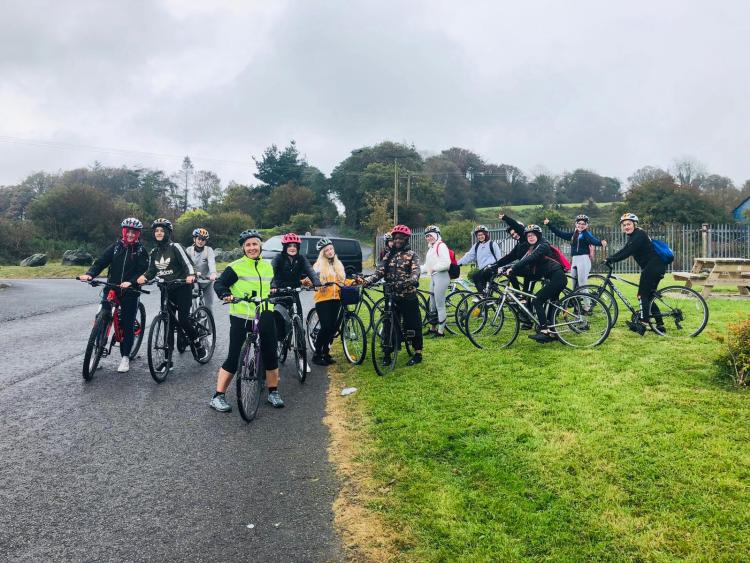 Presentation Waterford students and teachers enjoying a cycle on the Greenway

It has been a busy few weeks at the Presentation Secondary School in Waterford City.

The beautiful singing of the school choir echoed through St. Paul’s Church  as a representative group from the school joined some local parishioners for the  beginning of year mass, while the rest of the school community connected by live stream back in their classrooms.

This occasion, celebrated by Fr Pat Fitzgerald and organised by the Religion and Music departments at school, was greatly enhanced by the students’ contribution to the music, prayers and readings.

Head girl Sophie Griffin delivered a powerful address to her fellow students, imparting appropriate words of wisdom to each year group. She also thanked the staff of the school for ensuring a safe return after the lockdown, and for the support that teachers had given via email and zoom during this difficult time. Deputy principal Ruth Gallen was also inspirational as she addressed the staff and students of the school, wishing them the best of luck in the academic year ahead.

The passing on of the Light of Leadership is a Pres tradition, which generally happens at the end of the school year mass. This is a symbolic gesture, whereby the outgoing prefects pass on the light to the new incoming school leaders. As this did not happen in May, the head girl, deputy, and prefects took up the light at the end of this mass. “Although it was extra special that we were able to do this at the start of the year, it was a poignant reminder of the previous school year and the uncertainty that lies ahead,” the school spokesperson says.

Transition year students got off to a very active start to the year, taking every opportunity presented by the clement weather conditions to get out of the classroom on Tuesday afternoons.

“Their first adventure took them to Kilbarry Nature Park. They had a fantastic day here as they took part in a Digital Scavenger Hunt and great fun searching for clues,” a school spokesperson says.

“Being the energetic bunch that they are, a lively group of 33 students from the class enjoyed a lovely day out as they cycled 42km along the Greenway as part of National Bike Week 2020. They arrived back a little bit sore, a little bit wet, more than a little bit tired but all in agreement that it was really worth it.

“Thanks to Greenway Waterford Bike Hire for Providing the bikes, to Waterford Sports Partnership and Waterford City County Council for helping with funding.”

The buzz of a drone outside created a ripple of excitement recently, as footage of the school was captured for the first-ever Virtual Open Evening. “Although a bit daunted by the task in hand, both staff and students stepped up to the challenge to ensure that prospective students could get a taste of life in the Pres. Despite take after take, and shot after shot, everyone remained composed and kept smiling for hour after hour until we were able to say ‘It’s a wrap’,” the school spokesperson says.

“Although we were disappointed not to be able to greet the girls in person this year, we think we have captured a snapshot of life in our wonderful school and we were certain that the sixth class girls and their parents would enjoy their virtual visit.

“Thanks to all who were involved in the production, with videographer Kevin Power and drone operator Seán O ‘Donnell deserving particular mention. The short video is on our website.”