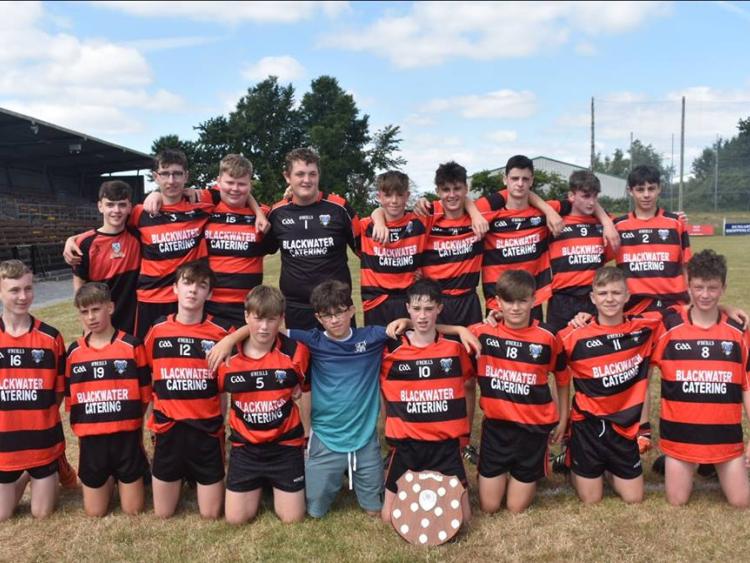 Stradbally started well with Darragh Farrell and Mickey Mullaney getting their hands on plenty of ball in the middle of the field. An early surge forward by Darragh Farrell  was halted by the tenacious Cappoquin wingback Conor Rooney, but moments later Rory Fennel was not to be denied with a nice point from play.

Cappoquin were under a little pressure at this early stage of the game and in the fourth minute goalkeeper Neil Collendar was called upon to strike a 65 to level the match and settle the nerves. Stradbally, playing with the wind, got back into their stride quickly but spurned two good scoring chances when Tommy Fennel and Darragh Farrell dropped their efforts short and wide.

Midfield maestro and Cappoquin captain Tadhg Kelleher finally broke the deadlock in the seventh minute when he hit a fine effort over the bar from play to give his team the lead for the first time in the game. Stradbally’s ever dependable Mickie Mullaney had the teams level for the second time moments later with a fine point from far out on the right wing from play.

However, the floodgates were well and truly opened in a four minute period of play when Cappoquin’s Sam Uniacke hit two goals without reply. It was end to end stuff at this stage! Stradbally rallied and threatened the Cappoquin goal and were unlucky not to score before Cappoquin broke back down the field and spurned a goal chance of their own when Sam Uniacke elected to kick the ball wide of the mark.

The resulting puck out was fielded by Conor Rooney who found Uniacke on the edge of the Stradbally box and this time he was not be denied his third goal of the game. A point almost from the puck out from Sam Uniacke had the Cappoquin men in front by 11 points with ten minutes left in the half.

Further Cappoquin pressure yielded a free for Tadhg Kelleher and another 65 from goalkeeper Neil Collendar extended the lead. Stradbally did finish the half well with two points which saw their team head to the half time pep talk behind by ten on a scoreline of 3-05 to 0-04.

Cappoquin started the second half well in terms of possession but not in terms of scores as they hit two wides from play and a 65. Cappoquin goalkeeper Neil Collendar lost possession after a long run from his goal line and was lucky to show a quick turn of pace to get back to his position before Stradbally could take advantage from a rare opportunity. Another pointed free from Mickie O’Brien was encouraging for the Stradbally men. However, the game was put beyond a reasonable doubt when Sam Uniacke hit his and his team's fourth goal of the game after being set up by Conor Rooney.

As a club, Stradbally have a reputation of never giving up on the cause and this team are no exception. A goal chance by Mickie Mullaney could have been a turning point had it been converted with fifteen minutes left in the game. Moments later Cappoquin’s wing forward Mark Ormond and Stradbally’s dangerman Mickie Mullaney exchanged points from play, and a well taken goal from Stradbally full forward Mickie O’Brien was a rapid and welcome response to Sam Uniacke’s fifth goal with just ten minutes left to the full time whistle.

Stradbally needed goals and several frees were speculatively dropped into the Cappoquin box, but the goals were not to materialise. One goal bound effort from Stradbally’s Rory Fennell was fielded under considerable pressure by Cappoquin cornerback Adam Hallahan and cleared down the field just before the final whistle rang out to crown Cappoquin champions.

Man of the match: Stradbally best performers in this Western final were Mickie Mullaney, Rory Fennel and Mickie O’Brien who never took the scoreline into consideration as they fought all the way to the very end of the game.

For Cappoquin, Neil Collendar had a fine game as did the hard working Tadhg Kelleher at midfield. Tom Coffey and Adam Hallahan were very solid on the full back line and Adam Burke, Michael Dalton and Mark Ormond were a constant threat throughout. But as the old adage goes ‘goals win matches’ and when a player scores six of them, as Sam Uniacke did, then he is without doubt the man of the match.