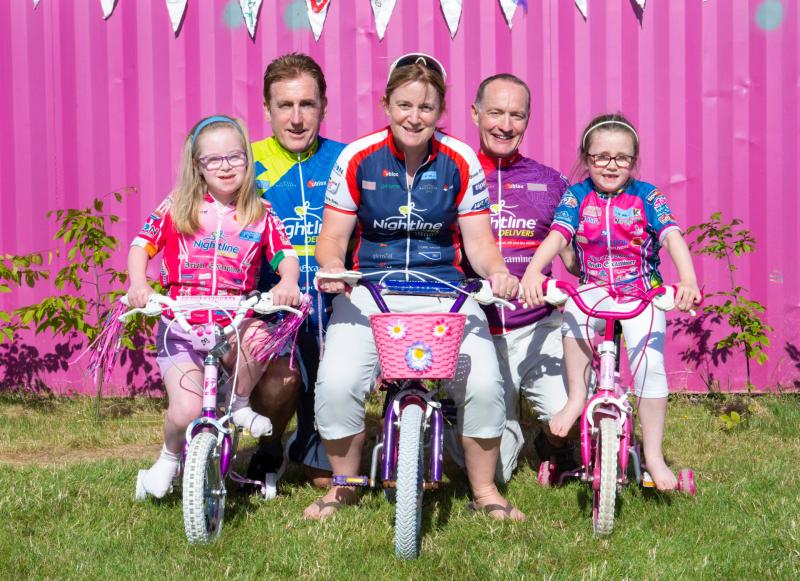 The cycle, which takes place from Thursday 9th to Sunday 12th August, will see over 100 amateur cyclists cycle over 600km around the six counties of Munster, raising funds for the Munster branches of  DSI and a number of other individual beneficiaries.

The launch event was attended by over 200 invited guests, including members from the various Munster branches of DSI and families supported by the charity, tour sponsors, celebrity guests, and many of the cyclists taking part this year.

The 2017 cycle raised a staggering €294,637.65, resulting in over €2.1 million raised for DSI alone. Since its inception in 2001, Tour de Munster has raised over €2.5 million for its beneficiaries. Over the partnership’s history, Tour de Munster has developed close ties and formed lasting friendships with DSI, with many of the charity’s parents and friends participating in the cycle year after year.

The aim this year is to raise a further €250,000 for DSI. 2018 is the 9th successive year that the national charity has been the main beneficiary of the cycle.

Funds raised have made a tremendous difference to the lives of people with Down syndrome in Munster, as well as their friends and families, by providing vital services and facilities in each county. The goal of DSI is to enable children born with Down syndrome to be as independent as possible, and through the great work of the Tour de Munster cyclists and supporters, DSI can access the funding needed to help more young people with Down syndrome develop and flourish in practical ways.

A new addition in 2017 saw cyclists having the option to select their own beneficiary and raise funds and awareness for it, and this will continue to be an option for this year’s tour. Fundraising can include personal sponsorship, but also commercial sponsorship whereby a sponsor logo placement will accompany a donation attracted by that participant.

Sean Kelly, who this August will celebrate his 13th year supporting the cycle, is delighted to celebrate DSI’s 9th year as beneficiary of funds raised. Speaking at the launch, Kelly said: “Tour de Munster is such a fantastic event and I am delighted to once again be associated with it. Over the past nine years I have met so many great people involved with the tour, and from beginning to end everyone is in it together. We are raising money for such worthy causes and meeting the individuals this evening who benefit from the funds raised really drives you.”

Tour de Munster was established in 2001 by Paul Sheridan, and has had a life changing impact on the lives of countless people through its fundraising efforts. “I am delighted to see so many people here this evening supporting the launch of the 2018 Tour de Munster. Each year we are blown away by the continued support from old and new faces, it’s something very special. We are thrilled to have Down Syndrome Ireland on board for the 9th year, raising funds and vital awareness regarding the challenges faced by those affected with down syndrome and their families. People will also have the option to raise money for an individual charity of their choice as way of helping some other worthy charities leverage from the continued success of Tour de Munster,” Paul said.

Paul continued: “We can’t thank the many businesses and organisations who have supported Tour de Munster enough. We rely on input from these, as well the public, to help us continue to make a real difference. I would like to thank everyone involved in tonight’s launch which has been expertly organised by DSI Cork’s Karen O’Sullivan and Jason Bane. Massive thanks also go to the cyclists and their own families who put everything they have into the 600km journey around Munster – their dedication doesn’t go unnoticed.”

Phil Keohane, branch liaison officer stated: “I'm delighted and honoured to be a part of such an amazing event. You can see year on year that the cyclists involved in the Tour de Munster are truly committed to the partnership between the tour and DSI Munster branches. As a proud parent of a young boy with Down syndrome I am truly grateful to each and every cyclist that takes part, whether it is for one year or every year, as well as all the bucket collectors and supporters along the route. Six years ago, I stood on St. Patrick's Hill after just coming out of hospital with my beautiful little boy who had been very ill, and 150 cyclists gave everything they had to get up that hill. As each of them passed I knew I was not alone, these people cared about my little boy and my family. I have taken part in every tour since then, it's an amazing feeling to be a part of that, and long may the partnership continue.”