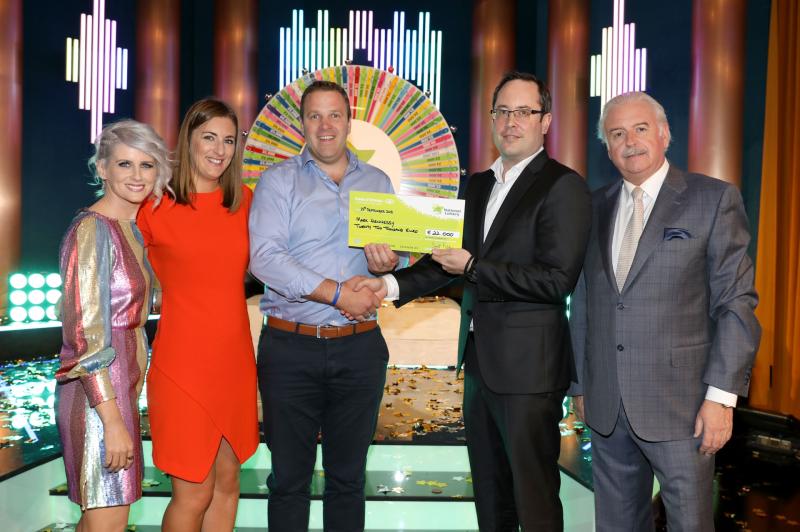 A tractor salesman from County Waterford won a cool €22,000 on the National Lottery TV game show Winning Streak last Saturday on RTÉ One.

Mark Hennessy from Kill in County Waterford got a late 35th birthday surprise when he was watching Winning Streak two weeks ago, which was the surprise of his life when he saw his own ticket pulled out of the drum.

It has been a lucky year for Mark who married his partner of five years last month, Elaine Brazil. The couple met in Australia while Mark was travelling and hit it off. Mark has also done a bit of travelling in New Zealand and Australia, where he lived for five years.

Mark is a cabinet maker by trade but works as a sales rep for Kill Agricultural Services where he is a tractor (and other farming machinery) salesperson.

He was well supported in the audience by his gang from Waterford which included his aunt and uncle Joan and Martin who raised him after his parents passed away when he was young. Also cheering him on was his father-in-law Liam Brazil who is a local councillor in Waterford and his brother-in-law Michael “Brick” Walsh who plays centre back for the Waterford senior team and is married to Elaine’s sister.

Mark, himself, is a keen sportsman himself who has played hurling for Waterford at under 21 and minor levels. He plays for his local club Kill GAA and is a massive fan of the Waterford hurling side. Also supporting him from home was his brother Eamon.

Ahead of appearing on the game show, Mark sought advice from a friend who appeared on Winning Streak in 2008 and won €64,000.

A total of €190,000 was won on last week’s show. The enhanced National Lottery game show, co-presented by Marty Whelan and Sinead Kennedy, features some perennial favorite games as well brand new games including Play or Pay, Roll for Riches, WinFall and Electric Dream, where one player wins an electric car worth €25,000.

The popular show, which is the second longest running game show in Europe, first appeared on our screens in September 1990 and since then a massive 5,975 people have taken part, winning in excess of €170 million in prizes.